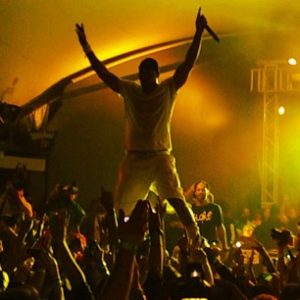 The storied music label Def Jam turns 30 this year and what better way to kick off SXSW this past week than have some of the labels top past, present and future put on a show case right in the heart of downtown Austin,Tx at Stubbs BBQ.

The show case opened up with Aloe Blacc, he went through a soulful medley of his hits, “I need a dollar,” “I’m the man,” and “wake me up.” Next , King Invaded the stage like a man on a man possessed channeling his energy on making sure his lyrics didn’t get lost in the enormous base from the speakers. Push performed fan favorites “King Push,” “Blocka,” and “Millions.” He closed his set with the 2002 hit “Grindin,” . Next up was the Compton MC YG, who came to the stage with instant energy as his DJ Mustard produced tracks “My Nigga” and “Who Do You Love”. During intermission DJ Mick Boogie keep the crowds energy buzzing with his old school Def Jam sets. As the night went on Meth and Red hit the stage to give fans what they missed if they never watched the documentary “BackStage” and showed why they’re legends in the game. They took turns performing their classics: Redman’s “Time 4 Sum Aksion,” “I’ll Be That,” and “Tonight’s Da Night”; and Meth’s “Method Man,” “Tical,” and “Bring the Pain.” They also rapped their collabs like “How High.” They interacted with the fans, they joked, they crowd-surfed and definitely showed why they are still hip-hops top performers. Last performer was the headliner Mr. Hair Weave Killa, unfortunately only 15 minutes into his show, the Atlanta rapper announced that he needed to wrap it up (in Austin,TX all concerts bars and venues must be over by 2 a.m.) The abrupt change of plans was bad for a few reasons. One, he was the headliner, and everyone who played before him, except for YG, received more time on stage.
Also, if he knew that his show would have been cut so short or had so little time its more than likely that he would have not performed some of his lesser-known songs in favor for some of his hits. The rumor was 2 Chainz was going to bring Kanye West onto the stage for a performance but due to the time loss that didn’t happen. But ScHoolboy Q who just released his debut album Oxymoron who was also in attendance (they just released a video for their collab “What They Want”) hit the stage with Titty Boi to make the best out of a bad situation and ended the night on a good note.