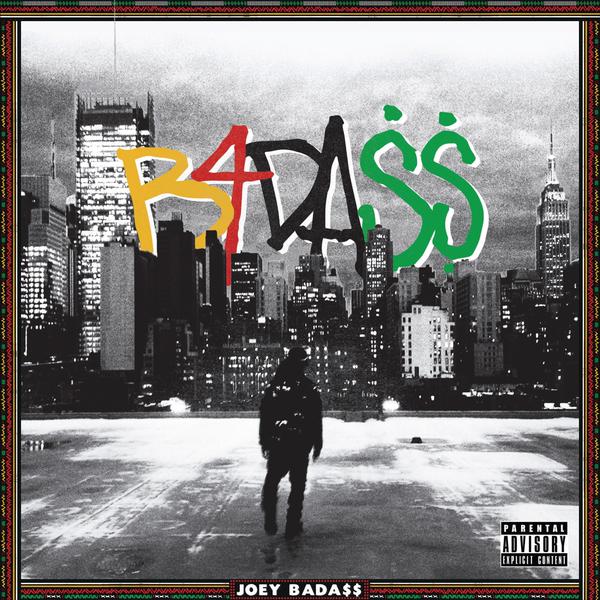 Exploding onto the scene with the excellent, throwback infused 1999 mixtape in 2012, Brooklyn native and Pro Era co-founder Joey Bada$$ has finally completed his highly anticipated debut album, B4.DA.$$. Set to release on January 20th, his birthday, many fans are looking forward to seeing how he pulls from the past but also pushes his brand of hip-hop into the future.

Before you even press play, the title speaks volumes about Joey’s mindset approaching the album. In introducing his mantra at the outset, you know his interest is in the music before anything when many artists of today put getting paid and gaining fame as priorities over the quality of their music. On “Paper Trail$”, produced by DJ Premier, Joey shares his divided feelings on the pursuit of the almighty dollar. Opening the track Joey laments “Before the money there was love/but before the money it was tough…it’s a shame this ain’t enough”. Balancing this is a desire to make it to the top and understanding that money is a necessity, continuing “I’m screaming C.R.E.A.M./Who fuckin’ with the rap supreme/Joey Bad and Big Prem came to collect the green”. Toward the end of the track he repeats “Cash Ruin Everything Around Me”, a play on “C.R.E.A.M.”, that seems almost out of place in modern popular hip-hop. It’s refreshing.

In true Bada$$ style, boom-bap infused beats and 90’s hip-hop references are littered throughout. Many detractors of his have bemoaned his seeming obsession with 90’s “golden-era” hip-hop and leaning towards that style, but that’s not overly evident on B4.DA.$$. His flow remains one of the best in recent memory thanks to his 90’s influences. Yes, there is definitely a throwback air to the tracks, it’s basically his trademark and a big reason I call myself a fan, but he’s no one trick pony. He expands his sound on tracks like “Escape 120”, “Teach Me”, and “Belly Of The Beast”, a gloomy bass-driven cut featuring Chronixx, a reggae artist that shares Joey’s Jamaican heritage.

Joey flaunts his driving flow and twisted wordplay on tracks such as “Big Dusty” (first of the album’s singles and a standout track overall), spitting “Staring down at the devil, hello, guess I got the memo/Pulling strings like Geppetto, you’re just a puppet, fellow”. On “Christ Conscious” he gets cocky, growling “Mothafuckin’ microphone eater/Spittin’ hot shit, hit your dome with the heater/Wouldn’t wanna be ya, dish lyrical fajitas/Got dragon balls like my name is Vegeta”. This “third eye divine” theme has carried throughout much of his work, including on piano-laced head-nodder “Hazeus View”, produced by fellow Pro Era member Kirk Knight. Knight, who also produced “Big Dusty”, provides some of the most solid production work on the album. Statik Selektah contributes some solid cuts as well.

Besides Selektah, the highest-profile producers on the album are Premier, Dilla and The Roots. Their contributions are spread over only two songs (with The Roots working over the Dilla beat “Like Me”), and I was hoping that Bada$$ would attract some more highly regarded names like Madlib and Flying Lotus. Lotus was said to have contributed some of his best work for consideration on the album and there isn’t a single track produced by him. It would have been great to hear the result of those collaborations.

The 90’s sound is definitely his comfort zone and he excels in that area, but in a couple of instances that the beat isn’t so familiar it takes a few listens to warm up to some tracks, especially on the second half of the album. That being said, this album is strong but far from perfect. At 17 songs (2 bonus tracks included), it’s too long. There are definitely a few tracks that could have been removed to make the album tighter, but I chalk it up to his continuing search for the right mix of his throwback hip-hop tendencies with modern hip-hop sensibilities.

B4.DA.$$ offers a lot of promise for the future while flaunting some solid, even excellent work, which is both encouraging and slightly disappointing. Bada$$ has been showing a lot of promise for a while now and I was hoping for B4.DA.$$ to be a bit more focused. He has the right mindset, but he’s still searching for that certain something, which he has displayed in flashes on 1999 and B4.DA.$$, that would cement him as a legitimate mainstay in hip-hop for years to come.