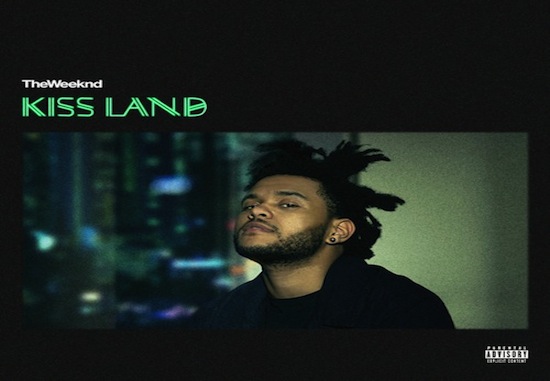 In 2011, Abel Tesfaye, under the stage name, The Weeknd, piqued the curiosity of listeners with his debut mixtape, House of Balloons. The collection of dark, drugged out R&B songs was enough to capture the attention of Drake, who immediately co-signed the up and coming artist by posting a link to download Balloons on his OVO blog.

Two equally acclaimed mixtapes later (Thursday and Echoes of Silence), it was due time that The Weeknd would have major label eyes on him. Subsequently, Trilogy, a compilation of all three mixtapes, including three bonus tracks, was dropped under Republic Records. A year later, we’re presented with his official debut, Kiss Land.

What’s interesting about Kiss Land is its self-consciousness; The Weeknd realizes his newfound status as a major label artist and, throughout the album, expresses joy for his newfound fame but laments the toll it takes on his relationships.

Abel immediately draws you into his world with the opening track “Professional,” a detailing of his relationship with a stripper or a prostitute, although not in the glamorous way rappers portray it in their songs. Here, he acknowledges her conflicted point of view but concedes that they are both playing their roles in their “relationship,” hence being “professional.”

On “The Town,” “Adaptation” and “Love in the Sky,” The Weeknd doesn’t compromise, leading us deeper into his psyche and the aformentioned conflicts between fame, lust, and romance. The Portishead-sampling single, “Belong to the World,” details Abel’s apparent fling with either a stripper, prostitute, or some industry gold digger. “I want to embrace you, domesticate you, but you belong to the world,” he sweetly croons to the woman in question.

“Live For,” featuring Drake who waxes with Tesfaye on enjoying the excesses that come with fame, was generally panned by fans and casual listeners alike on the Twittersphere when it dropped, but it’s one of those tracks that work better in context to the rest of the album, which serves as its double-edged sword.

On “Wanderlust,” Tesfaye brings up the topic of mistaking lust for love, although the song could be interpreted as a metaphor for his relationship with both fame and his fans (“Because tonight I’ll be right here and tomorrow you won’t care”).

While the title track “Kiss Land” is yet another tale of groupie/stripper love, “Pretty” serves as a companion to House of Balloons‘ closing track, “Knowing,” a song where The Weeknd acknowledges his lover going astray, in a condescending fashion, while “Tears in the Rain” is a closing, gut-wrenching summary of the effect fame has had on Abel’s relationships.

All in all, Kiss Land is a decent first major label effort from The Weeknd; it’s not perfect in the sense that if you’re familiar with his previous work, you’re left expecting a little bit more. While the music itself contains strokes of other genres beyond hip-hop and R&B and sound very polished, it still retains its signature darkness, but there is an “edge” missing. However, Kiss Land does serve as a good introduction to those who are new to The Weeknd’s music.