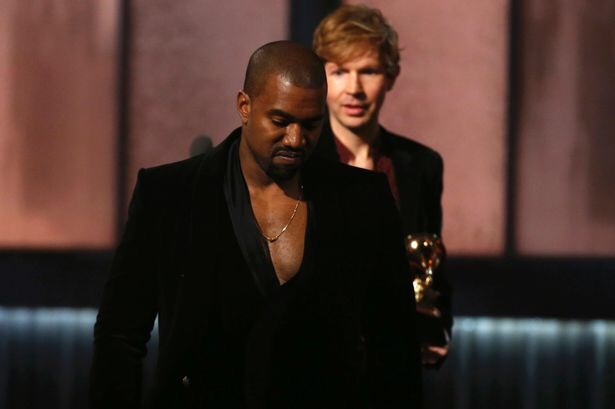 After Kanye pulled a Kanye and interrupted Beck during his acceptance speech at last nights Grammy awards, everyone wanted to know what Kanye would’ve said if he did grab the mic and later after the award ceremony Kanye gave his thoughts on it while talking to the E! News team.
And now we have Beck’s thoughts as well. And surprisingly he agrees with Yeezus. During a interview with Us Weekly Beck said

“I was just so excited he was coming up. He deserves to be on stage as much as anybody,” Beck told Us Weekly. “How many great records has he put out in the last five years, right?” Asked about West’s comments that Beyoncé should have won, Beck replied, “Absolutely,” adding, “I thought she was going to win. Come on, she’s Beyoncé!”

All Hail Beyzus. Honestly my thoughts on the situation are that Sam Smith was most deserving of the award number one and number two even though loved Kanye’s stage crash and his statements after, if Ye feels that strongly maybe he should just start boycotting award shows all together. Because now unfortunately to most he just looks like an attention whore and I hate that because what Ye is saying is right but just wrong place and wrong time. I’m also sure YEEZUS gives no fucks about what I just said as well LOL.

Sam Smith and Mary J. Blige Perform ‘Stay With Me” at The 57th Annual Grammy Awards