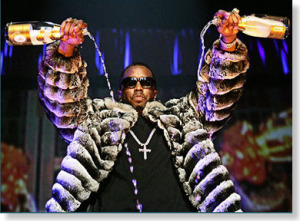 The mogul/Rapper formerly known as Sean”Puffy” Combs, P. Diddy, Diddy, The Shinny Suit man has changed his name once again, he would like to be called Puff Daddy once again like is his early days as the CEO of bad Boy Record.

He Dropped his “Big Homie” track with Rick Ross three weeks ago, and it looks like we now have a full music video which you can watch below. His latest LP will be named MMM the abrivation for Money Making Mitch, the name made famous by Mekhi Phifer in the cult film “Paid in Full”. Puffy says he wants to get back to his essence of stunting days and the only way to do that is to go full circle and go by that name again. Some of you my be too young to remember but he originally changed his name because of the legal problems he had back in 99′ for shooting at a popular NYC night club, he felt his name was being dragged through the mud so he wanted to a fresh new start after beating the case.

For the record, I did not change my name. I always have been and always will be PUFF DADDY! 🙂 Be cool Man lol #MMM #BigHomie RT!!!!