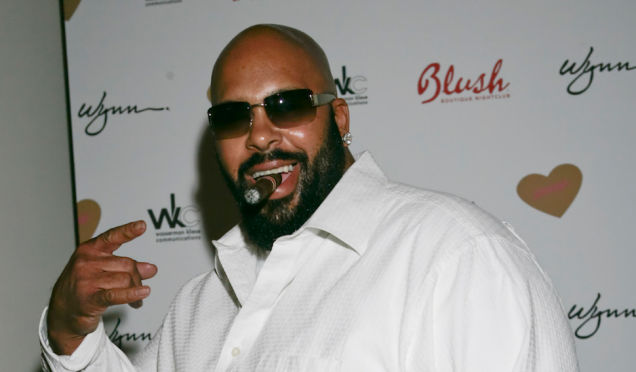 Suge Knight got into a fight on the N.W.A. movie set today (Jan. 29) TMZ reports and things got way out of control. Reportedly, the infamous Death Row Records founder got into his car and ran over a bystander who is now dead.
Reports TMZ:

Multiple witnesses tell us some kind of shoot — possibly for a movie or documentary — was going down with Game, Ice Cube and Dr. Dre when Suge pulled up in his car.

We’re told a fight broke out between Suge and 2 crew members. Suge got back into his car, took the wheel and threw the vehicle in reverse … and ran over a bystander.
It’s unclear at this point if the victim was connected to the film project.
Sources connected with Suge tell TMZ … the 2 men who fought Suge were the instigators. Our sources say Suge was scared because he’s in frail health — in addition to being shot 6 times last summer, he recently almost died from a blood clot.
Sources tell TMZ … the victim is Terry Carter, who we’re told is a friend of Suge’s. Another man was also hit … Cle “Bone” Sloane — who’s appeared in “Training Day” and “End of Watch” — suffered non-life threatening injuries.

Word is that Knight has fled the scene.

Marion “Suge” Knight was charged with murder and held on $2 million bail after a hit and run incident on Thursday. Knight surrendered to authorities early Friday morning and was interviewed by police for three hours, according to the Los Angeles Times. Suge’s lawyer admits that the mogul was behind the wheel when an unidentified 55-year-old man was killed and 51-year-old man was injured, he told the Associated Press that the incident was unintentional.

“We are confident that once the investigation is completed, he will be totally exonerated,” James Blatt said. “He was in the process of being physically assaulted by two men and in an effort to escape he unfortunately hit two [other] individuals. He was in his car trying to escape.”

Witnesses who were at the scene claim, according to Los Angeles County sheriff’s Lt. John Corina. “The people we talked to say it looked like it was an intentional act.”

Me, Dre and The Game shooting a commercial in Compton

Chance The Rapper And The Social Experiment Cover The FADER