Yesterday Harlem was well represented at Complex’s magazines THE COMPLEX back yard party in Austin, TX for South By SouthWest. The Trap Lord was up first perform his crowd pleasers “Work” and “Shabba”, to close out the four day party was Complex’s magazines current cover boy Cam’ron. Cam went through a medley of his hits and let the crowd know he could keep them there all night because his catalog was so extensive. Cam definetly delivered and gave the crowd what they wanted, he closed out with his hit song “Suck it or Not” and was joined on stage by ASAP Ferg and Fred The God Son. Also in attendance was Skrillex, Danny Brown and Young Thug who also had performances through the day at THE COMPLEX back yard party.

Watch the video clips below: 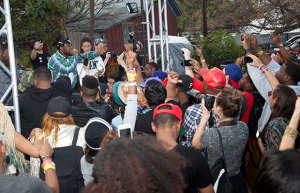