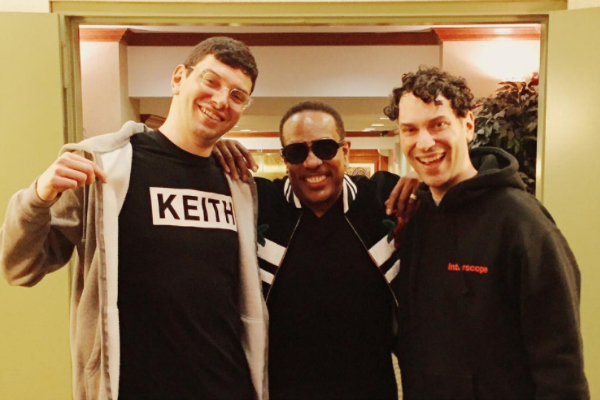 This podcast interview might be one of my favorite of the year so far, the latest episode of A Waste of Time With ItsTheReal, Eric and Jeff Rosenthal sat down with the legendary Charlie Wilson!In the amazing conversation Wilson details his rise, fall in the 90’s and his triumphant return to the lime light. He details his early days with his brothers in The Gap Band, co-writing “Computer Love” with Zapp, and becoming homeless and his struggles with drug addiction. Charlie also shared stories about some of his amazing relationships with some of raps biggest stars. Listen to the full episode and check out a few of the best quotes below.

“I remember one time, we were in the studio. ‘All of the Lights’ and all that stuff was going on. Of course, when you’re in the studio with Ye, there’s no blurting out things. So [my wife]’s like, ‘yo Kanye.’ He stops, he was typing and looks up. ‘Hmmm?’ And she said, ‘You know who you ought to put on this record?’ He was like, ‘…who?’ She said, ‘Rihanna!’ And I just threw my paper in the air, my feature’s out the window! And he said, ‘Rihanna? Okay!’ I was like, ‘you just gave my feature away to Rihanna?!’”

On the alternate version of “Flashing Lights”:

On the Rosewood movement:

“You couldn’t even mix a record without a suit on. If you were in another state, Ye would be like, ‘check this out, you got your suit on?’ You better say yeah!’”

“[Val Young] kept telling me that Snoop wanted to meet me. So I went down to [the studio] where she was, there was 2Pac and all those guys. Snoop locked the door with me in there and wouldn’t let nobody get in. We bonded really, really fast. He asked me to start singing and he was like, ‘wow dawg, you still got them chops!’ We recorded a lot, I don’t know how many albums. Everything that he wanted me to do vocals on, I would do it.”

“I remember ‘Pac came in [the studio], he was talking about me. When I walked in, he just started jumping up in the air, because he had just said my name! He said, ‘man, if Charlie Wilson was here!’ So when I walked in, he just lost it. He was like, ‘dude, I just said your name! And here’s the record I want us to do together.’ I heard it, it was one of my own, it was just flipped a little bit. He wanted me to do the hook, it was a funky record man, it was bad. Snoop came and I said, ‘I gotta go.’ We locked ourselves in, and they were banging on the door like, ‘Pac wanna see Uncle Charlie!’”

“Before he got famous, I used to sing hooks for him. He flew me in [to New York City] to do these records. My brothers, we had a show. I remember Pharrell was there and my wife was trying to push him up on the stage. He was like, ‘no!’ He was all nervous. We had a great time back in those days. I told Pharrell, ‘let me tell you something man: you’re either gonna be the biggest producer in the world, or you’re gonna straight suck eggs.’ I said, ‘I know other people are probably laughing at your beats or whatever.’ Man, he cracked their heads wide open.”

“Before Nate Dogg died, he wanted me and him to do some records together. It was like a changing of the guard: okay, Nate Dogg’s done that sound, Uncle Charlie’s here now, so that sound became fresh to everybody’s ears. But then he had a stroke. We just didn’t get a chance to get it done.”