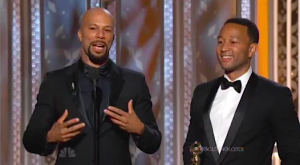 The strong speech paid homage to the civil rights leaders that sacrificed so much before him as well to pay tribute to the unarmed black teens and murdered police officers in the past year.

Common and John Legend composed the song “Glory” for historical drama Selma based on Dr. Martin luther King’s march in Selma,AL during the 1960’s. Common’s definitely spoke volumes and moved all the on lookers during the ceremony. Hi speech mentioned the current events in the news, mentioning the shootings/murders of unarmed black men in Ferguson, Mo., and Staten Island, N.Y., as well as the killing of two police officers in Brooklyn, N.Y., last year. 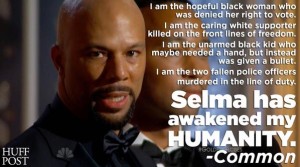