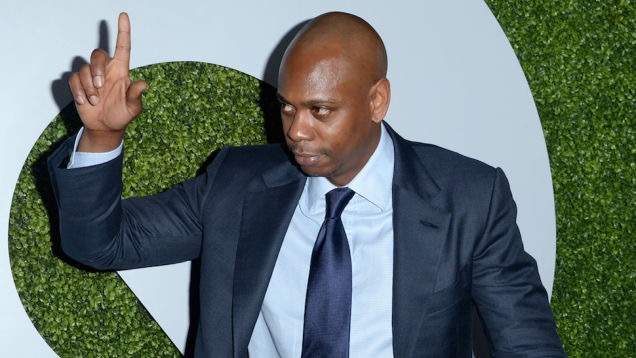 The media coverage of NAACP president Rachel Dolezal shows no signs of slowing down. As you may know, over the weekend, Dolezal’s parents accused her of lying about being black when she is, in fact white. The unusual accusation made its way to Twitter (as everything does,) along with the now infamous #AskRachel hashtag.

The situation is reminiscent of Dave Chappelle’s iconic sketch in which a character named Clayton Bigsby, a blind black Ku Klux Klan member, thinks he’s white. “Now would be a great time for a Chappelle Show sketch on this” is what some wondered, and while it would be entertaining, don’t expect the comedian to take part in the jokes.

Speaking at his high school’s commencement ceremony this past Sunday, Chappelle spoke on the controversy, saying:

“The world’s become ridiculous. There’s a white lady posing as a black lady,” he commented. “There is not one thing that woman accomplished that she couldn’t have done as a white woman. There’s no reason! She just needed the braids! I don’t know what she was doing.”

In an interview backstage with the Washington Post, he added:

“The thing that the media’s gotta be real careful about, that they’re kind of overlooking, is the emotional context of what she means. There’s something that’s very nuanced where she’s highlighting the difference between personal feeling and what’s construct as far as racism is concerned. I don’t know what her agenda is, but there’s an emotional context for black people when they see her and white people when they see her. There’s a lot of feelings that are going to come out behind what’s happening with this lady. And she’s just a person, no matter how we feel about her.”

The publication also asked Chappelle where Dolezal would land in the Chappelle Show racial draft. “I think black,” he told the Post. “We would take her all day, right?” He also swore off the Rachel jokes, for now at least. I’m probably not going to do any jokes about her or any references to her for awhile ’cause that’s going to be a lot of comedians doing a lot,” he explained.

Watch Tyler, The Creator and Vince Staples Freestyle on ‘Real Late With Rosenberg’