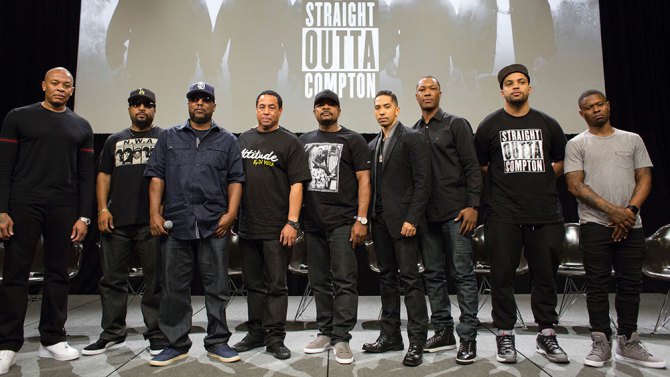 Straight Outta Compton remains a heavy topic of discussion nearly a week after its release.

While the film id receiving rave reviews and high praise you acn’t have the good with out the bad. The dark cloud of certain committed events are being brought into question about whats been left out the film. Most notably Dr. Dre’s assault on television host and former friend Dee Barnes. As it turns out, the 1991 incident was supposed to be included in the movie at one time.

At a pre-release screening, part of which can be viewed in the clip below, director F. Gary Gray addressed a few of the film’s omissions. He described in detail what the scene with Barnes would have looked like, according to the L.A. Times.

In the scene, the fictional Dre, “eyes glazed, drunk, with an edge of nastiness, contempt” (per noted from the script) spots Barnes at the party and approaches her.

“Saw that sh*t you did with Cube. Really had you under his spell, huh? Ate up everything he said. Let him diss us. Sell us out.”

“I just let him tell his story,” Barnes’ character retorts, “That’s what I do. It’s my job.”

“I thought we were cool, you and me,” Dre fires back. “But you don’t give a f*ck. You just wanna laugh at N.W.A, make us all look like fools.”

The conversation escalates, Barnes throws her drink in Dre’s face before he attacks her “flinging her around like a rag-doll, while she screams, cries, begs for him to stop.”

Gray also addresses leaving out other significant parts like the diss songs between Eazy-E and Dre, the fight in which Dre’s brother was killed, Cube going to NYC for the first time, Dre being shot and Eazy discovering Bone-Thugs. He contends those decisions were made for the sake of time. The director revealed the original script was 150 pages total, and the original editor’s cut was more than three and a half hours long.

“We had to make sure to serve the narrative,” he told the audience in the clip seen above. “The narrative was about N.W.A. It wasn’t about a lot of side stories… We had to focus on the stories that were pertinent to our main characters.”

“There are so many things that you can add or subtract. Cube always said, ‘You can make five different N.W.A movies.’ We made the one we wanted to make.”