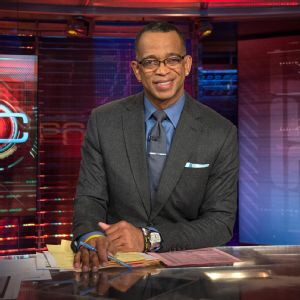 Longtime ESPN Anchor Stuart Scott has passed away this morning. He was 49 years old. Scott battled cancer since 2007 and worked for ESPN for 21 years. He was easily one of the most recognizable figures on Sportscenter and other studio shows. A partial statement from ESPN can be found below:

Stuart Scott, a dedicated family man and one of ESPN’s signature SportsCenter anchors, has died after a courageous and inspiring battle with cancer. He was 49.

Scott is survived by his two daughters, Taelor, 19, and Sydni, 15; his parents, O. Ray and Jacqueline Scott; and his three siblings Stephen Scott, Synthia Kearney, Susan Scott and their families. His girlfriend, Kristin Spodobalski, was with Stuart and cared for him every step of the way and along with support from his loving family, close friends and colleagues, he went through several surgeries, chemotherapy, radiation and clinical trials to stay strong and ward off cancer for as long as humanly possible.

“ESPN and everyone in the sports world have lost a true friend and a uniquely inspirational figure in Stuart Scott,” said ESPN president John Skipper. “Who engages in mixed martial arts training in the midst of chemotherapy treatments? Who leaves a hospital procedure to return to the set? His energetic and unwavering devotion to his family and to his work while fighting the battle of his life left us in awe, and he leaves a void that can never be replaced.”

Full Statement can be found here.