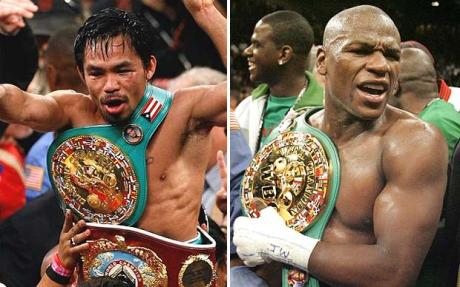 It’s official, it’s been nearly six years in the making, but Finally Floyd “Money” Mayweather and Manny Pacquiao agreed to square off at the MGM Grand in Las Vegas on May 2nd.

“I am glad my decision to meet with Manny and discuss making this fight happen helped get the deal done,” Mayweather said, referring to a chance Jan. 27 meeting with Pacquiao at a Miami Heat game followed by a private meeting after the game. “Giving the fans what they want to see is always my main focus. This will be the biggest event in the history of the sport. Boxing fans and sports fans around the world will witness greatness on May 2. I am the best ever, TBE, and this fight will be another opportunity to showcase my skills and do what I do best, which is win. Manny is going to try to do what 47 before him failed to do, but he won’t be successful. He will be number 48.”

Listen: Fashawn Feat. Nas & Aloe Blacc ” Something To Believe In”