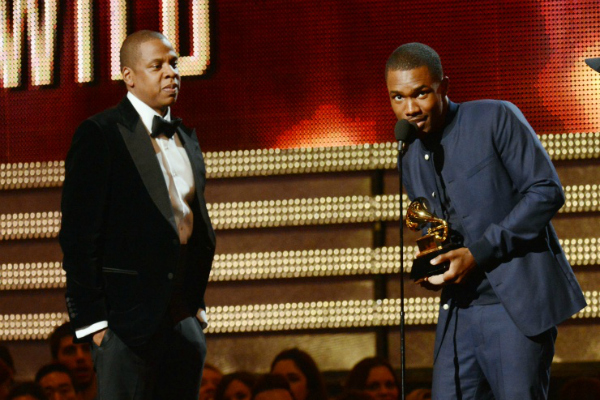 Frank Ocean has reemerged in a big way since dropping his two new albums at the end of 2016. He is featured on Calvin Harris’ new song (and future summer smash) “Slide” last night, but that’s not all, the grammy award winning singer/song writer debuted his surprise new show blonded RADIO on Beats 1.

Ocean was joined by guest hosts Vegyn, Roof Access and Federico Aliprandi, Frank played a mix of his own music and some of his favorite songs by other artist ranging from Prince to Future to Migos and many more. Oh, and he stunted on everyone by interviewing new “song writer hall of fame inductee” Jay Z, too.

In the brief conversation, Frank and Hov spoke about the state of modern radio, technology and hip-hop clubs.

“Take radio for instance. It’s pretty much an advertisement model. You take these pop stations, they’re reaching 18-34 young white females. So they’re playing music based on those tastes. And then they’re taking those numbers and they’re going to advertising agencies and people are paying numbers based on the audience that they have. So these places are not even based on music. Their playlist isn’t based on music. If you think a person like Bob Marley right now probably wouldn’t play on a pop station. Which is crazy. It’s not even about the DJ discovering what music is best. You know, music is music. The line’s just been separated so much that we’re lost at this point in time.

They have to revolutionize that thing, you know, be more progressive. I think with all the technology and where we are today, it’s definitely a more efficient way to get music out. Because it’s the whole idea behind having a festival that played all sorts of music. Because no one listens to music like that – you just listen to music more than ever. Back in the days there used to be hip-hop clubs. Like, specific hip-hop clubs. Now every club is a hip-hop club. Every club is a music club. You go in there, you’re liable to hear EDM, hip-hop, you’re gonna hear some soul, you’re definitely going to hear “Poison” around 2-3 in the morning.

It’s unfortunate because with, you know, technology and everything moving forward, we should, it should be a better way that the music, the musicians, radio, and these things that are supposed to be instruments for the arts, should exist. And it shouldn’t be about advertisement. And it shouldn’t be about—so the more times, you know, someone like yourself can bypass that, it’s better for the, for the arts. And it’s better for the audience ‘cause you have to have, like, a level of discipline and just a belief to put music out in this place where not everyone can. You know, people, like, they wanna shoot for that, and then they’re making music that’s not really conditioned to who they are [Frank says “right”], who they are so they can reach a certain platform.”

No word yet on if blonded RADIO will be a regular thing or it was just a one-off. Also it’s a bit of a mystery why Jay Z, majority owner of TIDAL, decided to appear on Apple Music, especially considering how he’s kept a portion of his catalog off competing streaming services, but that just shows how well respected Frank is that Hov even gave Apple music that look.

Listen to an excerpt of Frank and Jay Z’s interview below and click here for the full blonded RADIO episode.