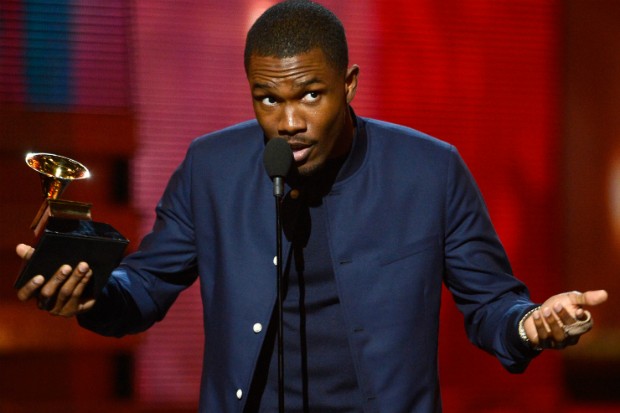 Rolling Stone recently released an interview with Grammy producers Ken Ehrlich and David Wild. On the Rolling Stone podcast (which you can listen to here) the producers went on to explain why Frank Ocean has so-called beef with the Grammys. Ocean previously called the award show “dated,” did not submit his album for contention.

According to the producers, ocean is still upset about his disappointing performance at the 2013 Grammys. Wild said that Ocean declined to collaborate with the Grammys producers on the performance, calling the singer’s behavior “childlike.” Ehrlich agreed, and said that Ocean was “rigid” in his idea for the performance. “We executed his vision knowing that it was faulty. And we tried to tell him that, we tried to tell his management that, we tried to tell the record label that. So, his feelings about the Grammys right now, I would imagine, probably go back to that in one way. But honestly, it wasn’t us.”

Of course, once Frank caught wind of the interview he took to his Tumblr site to reply. Read the full response below.

OK KEN (AND DAVID). AS MUCH AS I HATE TO MAKE YOU GUYS FAMOUS OR EVEN RESPOND TO YOU DIRECTLY. WE ALL DIE ONE DAY AND YOU’RE OLD SO FUCK IT. YEA YEA MY 2013 PERFORMANCE AT THE GRAMMYS WAS ABSOLUTE SHIT. TECHNICAL DIFFICULTIES, BLAH BLAH. THANKS FOR THE REMINDER. VERY MUCH APPRECIATED. FUCK THAT PERFORMANCE THOUGH. YOU THINK THAT’S WHY I KEPT MY WORK OUT OF THE GRAMMY PROCESS THIS YEAR? DON’T YOU THINK I WOULD’VE WANTED TO PLAY THE SHOW TO ‘REDEEM’ MYSELF IF I FELT THAT WAY? IN REALITY, I ACTUALLY WANTED TO PARTICIPATE IN HONORING PRINCE ON THE SHOW BUT THEN I FIGURED MY BEST TRIBUTE TO THAT MAN’S LEGACY WOULD BE TO CONTINUE TO BE MYSELF OUT HERE AND TO BE SUCCESSFUL. WINNING A TV AWARD DOESN’T CHRISTEN ME SUCCESSFUL. IT TOOK ME SOME TIME TO LEARN THAT. I BOUGHT ALL MY MASTERS BACK LAST YEAR IN THE PRIME OF MY CAREER, THAT’S SUCCESSFUL. BLONDE SOLD A MILLION PLUS WITHOUT A LABEL, THAT’S SUCCESSFUL. I AM YOUNG, BLACK, GIFTED AND INDEPENDENT.. THAT’S MY TRIBUTE. I’VE ACTUALLY BEEN TUNING INTO CBS AROUND THIS TIME OF YEAR FOR A WHILE TO SEE WHO GETS THE TOP HONOR AND YOU KNOW WHAT’S REALLY NOT ‘GREAT TV’ GUYS? 1989 GETTING ALBUM OF THE YEAR OVER TO PIMP A BUTTERFLY. HANDS DOWN ONE OF THE MOST ‘FAULTY’ TV MOMENTS I’VE SEEN. BELIEVE THE PEOPLE. BELIEVE THE ONES WHO’D RATHER WATCH SELECT PERFORMANCES FROM YOUR PROGRAM ON YOUTUBE THE DAY AFTER BECAUSE YOUR SHOW PUTS THEM TO SLEEP. USE THE OLD GRAMOPHONE TO ACTUALLY LISTEN BRO, I’M ONE OF THE BEST ALIVE. AND IF YOU’RE UP FOR A DISCUSSION ABOUT THE CULTURAL BIAS AND GENERAL NERVE DAMAGE THE SHOW YOU PRODUCE SUFFERS FROM THEN I’M ALL FOR IT. HAVE A GOOD NIGHT.

Stream Mike Lo’s ‘You Made Me’ EP

According to Cam’ron, Here’s The Real Reason Jim Jones Was Crying on Flex’s Show