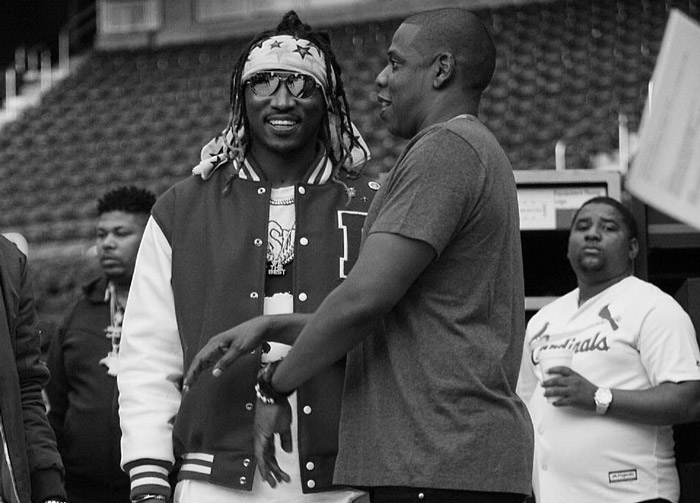 Steve Stoute has been releasing a string of clips on his Instagram from a barber shop discussion with himself Ebro Darden, Paul Rivera, Maverick Carter, NBA Stars LeBron James, Kevin Durant, James Harden, and Rapper Future.

In the 30 second clips the discussions are surrounded by arguments over rappers. In some of the clips they discuss what defines a “Top 5 Rapper,” Classic albums and more. There are no details on if Stoute will release the barber shop convo in full but the clip that caught everyones attention was Future making the statement that “Jay Z wasn’t considered great until Biggie and Pac both passed away.” Of course that caught everyones attention and Steve Stoute asked him “Did he hear Reasonable Doubt,” and Future went on to say yes, ‘Reasonable Doubt was Flames, it’s a classic, it’s hard but it wasn’t appreciated until later in Jay’s career.” He gave the example that when Nas first dropped he was recognized as the man but for Jay a lot of rap fans had to go back and listen to Reasonable Doubt to appreciate that project. Now knowing all of Hov’s success as of now, you’d think this was blasphemy but the facts are commercially the album wasn’t a success (Ebro chimed in to back Future up on that point) but was still considered a classic and is now haled as one of raps best albums ever along with the likes of Nas’ Illmatic and Raekwon’s Only built 4 Cuban Linx.

“I’m saying at that time, [it wasn’t hot]. They always go back for your classic album. When Nas dropped his first album, it was great then, Future continued. “When ‘I Ruled The World’ came out, it was the best then. You have to go back and listen to Reasonable Doubt and [think] this the best sh*t ever.” To be fair, Jay himself took note of this on “Hard Knock Life,” rapping, “I gave you prophecy on my first joint, and y’all lamed out/Didn’t really appreciate it ’til the second one came out.” – Future

Now many may take this as Future taking shots at the God MC, but he was just making the point that rap fans will put Jay on a certain level that he didn’t gain until later later in his career. Personally I feel Reasonable Doubt is Jay’s best work to date many might say Blueprint but opinions are opinion right? But yes back in 96′ Jay wasn’t the top dawg in rap, Pac, B.I.G., Snoop Dogg were. Jay took the King of New York crown after Biggie passed and even then he had the likes of DMX, Ma$e, Big Pun, Nas and rappers from other regions to compete with before he became Raps undisputed King. So yes in way Future’s statements are correct but I’ll also go on to say Jay’s ability was never slept on. His star power wasn’t fully recognized until after Biggie and Pac were no longer with us. Many may disagree but like Hov said himself “Men lie, Women lie… but numbers don’t.”