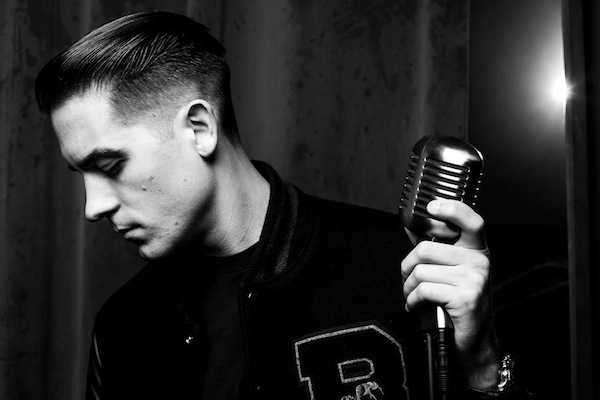 Bay Area rapper Gerald”G-Eazy” Gillium, a six-four lanky white boy that looks like Danny Zuko from the movie Grease, is shaping up to be hip hop’s “Next Big Thing.” His debut album These Things Happen debuted at number three on the Billboard charts, outselling well established acts in the process. He regularly sells out shows across the country, has eight YouTube videos with more than 3 millions views and the impressive part is, this is without any major promotion. With no mainstream radio play he’s also managed to score the cover of Rolling Stone. Although his music can be coined as crossover, he is one of the most popular underground artists since Macklemore to garner a buzz like this on his own. When he was first brought to my attention by a close friend of mine I instantly thought “Is it because he’s a white rapper?” We’ve seen Macklemore resonate in similar form. So me being the curious blogger that I am, I decided to do a little research on the guy and to my surprise G-Eazy has paid his dues building a career from the ground up the old fashioned way.

Since 2007 back in the prehistoric Myspace days, Eazy has been on the long road towards success. He went from being a prisoner of the moment heavily influenced by the late 2000’s trend of auto tune crooning tracks, to a more minimalist style while sticking to his Bay Area roots with the hyphy-centric sound. He tours year round non-stop building up his fan base the same way Bay Area OG’s like E-40, Too Short and MC Hammer had before him. Eazy attended Berkley high school, the same school as Lil B and The Pack. Seeing them become breakout stars inspired him to get on his grind and print up his own CD’s and sell them out of the trunk of his car. After finishing high school, he moved to New Orleans to enroll in Loyola University’s music studies program. There he learned that marketing and image matter just as much as the quality of the artists’ music. This lesson would truly pay off later on in his career. There were plenty of bumps in the road along the way but what aspiring music artist doesn’t have a couple doors slammed in their face? G spent sleepless nights in the studio all while pursuing his college degree, and crashed on friends couches while juggling it all.

Seeing how he’s currently positioned to be one of the music industry’s most sought after commodities, I’m sure the hard years were worth it. After a huge bidding war, he just signed a lucrative deal with RCA (one of the many labels that told him that he didn’t have what it takes during their first encounter) were he will be able to keep full creative control. His brand is something he needs no help with, and his fan base (mostly women for now,) continues to grow by the day. He regularly wears all black with his signature 1950’s slicked back hairstyle. He says the inspirations for his minimalist style are Johnny Cash and James Dean. At his shows he offers fans a unique back stage experience where they can receive The V.I.P. package. The package runs for $100 and includes an on-site haircut from G-Eazy’s barber back stage at his concert. Gilliam has stated he isn’t content with his “underground” label (though he is quite successful in that right) being compared to both Tech N9ne and Insane Clown Posse for their successful album sales with promo only coming from touring and word of mouth. Eazy was recently quoted in Rolling Stone, sharing exactly how he wanted his legacy to be.

“Because I have an addictive personality and fame is the most addictive drug there is,” he says. “I want to be a star. I want to be a fucking DiCaprio of this shit. I don’t want to be a small time independent successful rapper. The ultimate challenge to that equation is finding a way to play the game but by my rules. To bring my music without dumbing myself down and making bubblegum pop in exchange for becoming famous. I want to bring my world to the major leagues.”

With blessings from the Bay Area OG’s E-40 and Too short as well as holding his own on tour with Drake, Lil Wayne, Jeezy, and 2 Chainz, it’s very possible he could one day be competition for these established stars. With the follow up to 2014’s These Things Happen on the way, only time will tell if G-Eazy is the “Next Big Thing.” For now we will just have to wait and see if the Bay Area MC is worth the hype.