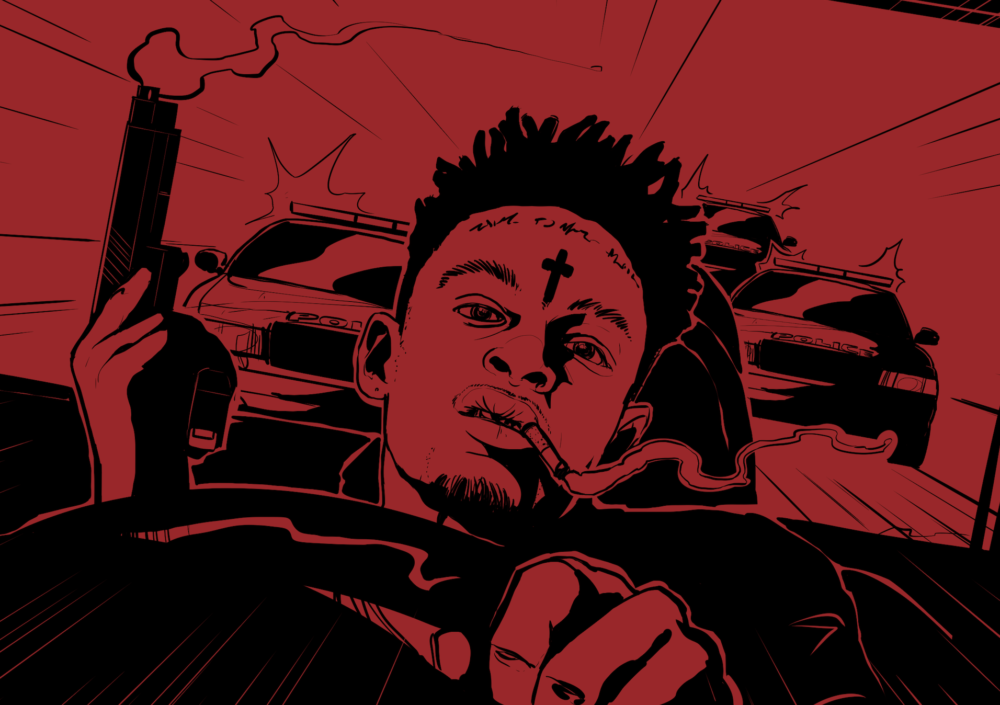 A dark red car can be seen riding off in the night on Ocean Drive with the windows down. The driver flicks his cigarette and takes a swig of his codeine syrup, concealed in double cups. He lets off a devilish grin and speeds into the night. Police sirens can be heard trailing him as he fades out.

4 Hours Before: The hotel room is unusually dark but spacious. It echoes with each movement. Intense lovemaking can be heard from one of the rooms before a sudden halt. “I got a bitch, so don’t you leave me no hickies,” the man says before pushing the woman off of him. She falls to the side of him on the bed, and sucks her teeth as he adjusts his chains and VVS rings. The man’s tall frame rises from the bed, as he kicks the woman out of the room. She gets up and collects her things from the foot of the bed. He notices his roll of money on the floor by her foot. “You steal, I’ma cut off your hands,” he warns her. She looks up at him terrified before gathering her things and exiting the room, half-naked. The man walks over to the window and pulls the curtains back. The streetlight shines on his face, exposing a detailed tattoo of a knife on his forehead. He turns around and puts on his shirt and pants before exiting the room. 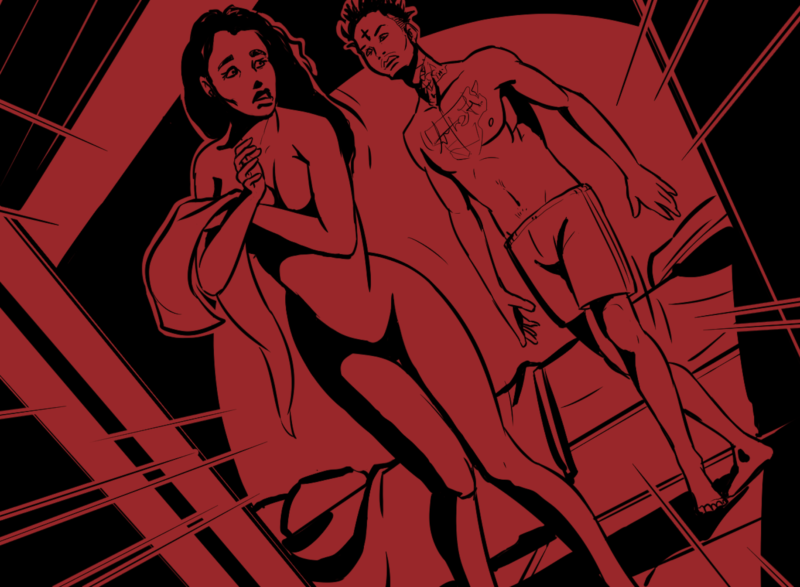 As he boards the elevator, a young couple is visibly shaken by his presence and moves away from him. His face is stone cold. He presses the button for the lobby, and the elevator ride remains silent. He exits and makes his way through the lobby with everyone moving from his path. The valet has his car ready, and quickly moves out of his way.

He drives through the night, but where he’s going is unclear. His phone vibrates with a new message from Future: “Young Savage, why you trappin’ so hard? 😂,” it read. He smirks before responding, “These pussy niggas love sneak dissin’ till I pull up on them.” He tosses his phone to the passenger seat before pulling into a driveway.

Inside the house, a man is watching TV with his family. A loud thump from the back porch frightens them. He tries to ignore it, but it happens again, this time louder.  Reluctantly, he makes his way toward the door. A towering shadow fills the doorway. He screams before Savage’s hand bursts through the glass door and grabs him by the neck, throwing the man to the ground. His family screams as he urges them to get out and save themselves. The man nervously moves away from Savage, as Savage calmly walks toward him. “I listened to your raps, and thought you was hard. You ain’t even street for real,” Savage mutters disappointed. The man on the floor continues to move away from him in horror. “All these niggas play like they tough till a nigga get killed.” The man on the floor looks up, confused.

“I’ve been with you since day one, Savage I ain’t even hating,”  he pleads.

“So what’s up with all that Instagram shit?” he heatedly asks.

“Savage, I was just playing!”  the man cries as he continues to back away. His family continues to look on in horror, as Savage flashes a gun in the man’s face. “Come on, man you know I always play your mixtape,” the man says. This causes Savage to lose it, and he begins beating the man in the face with his pistol while his family screams. 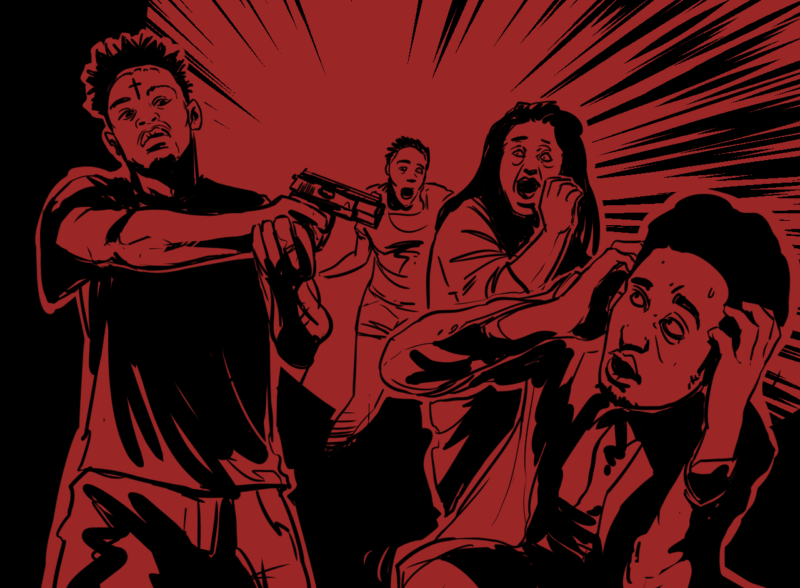 When Savage emerges from the house, he’s cleaning blood from his pistol with a red silk cloth. He walks nonchalantly back toward his car and drives off. He abruptly stops at a private location, where he picks up his friend Future, who Savage urges to jump in the backseat, before he takes off again. The duo ride off in silence.

“21, I ain’t texting back that bitch,” Future utters looking down at his phone. He’d been going through a rough breakup, and Savage has been there to help him. “She got a nigga, but he broke. She lost,” Savage insists. Future shakes his head and tucks his phone away, as Savage passes him a drink. He decides to change the subject a bit, inquiring where they are off to, and why he had to sit in the backseat. Savage only tosses Future a ski mask and urges him to put it on. He points at their next stop, where a group of friends are seen hanging out in the wee hours of the night. “We ain’t really with all that internet shit,” Savage says as he tosses Future a machine gun that rested in the front seat. He speeds up and begins shooting at a group of friends. They scatter and run for cover as Savage and Future continue to open fire. Savage manages to shoot one of them in the leg. The victim falls to the ground as his friends continue running. Future takes down another friend, who falls down in the street next to the other. The car slows down behind the men. Savage opens his door as the men can be heard grunting, attempting to crawl away. 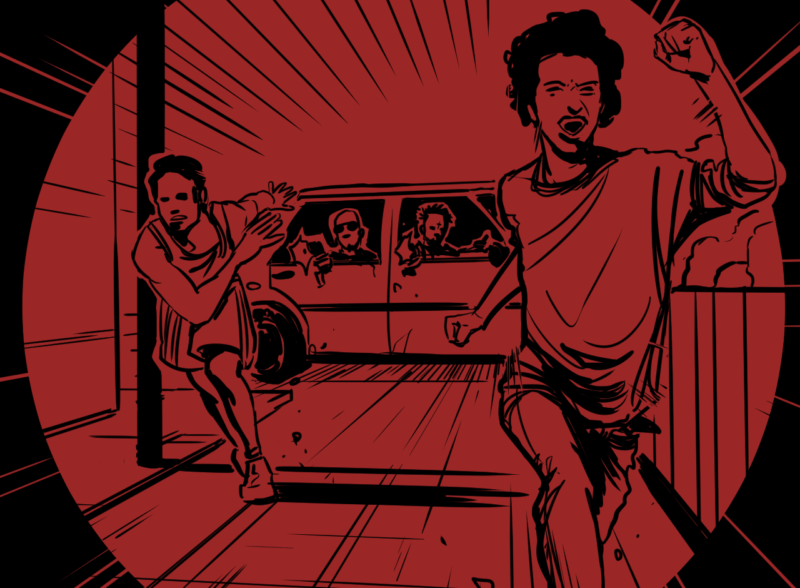 “I’m a fucking bad guy, n*gga,” Savage mumbles, as he’s walking toward the men on the ground. Future remains in the backseat, watching the scene unfold. “How it feel to be a real n*gga?” Savage asks, as the men scream for their lives on the ground. “I kept it real with a lot of n*ggas,” he says as he sits on the curb next to the men and watches them both struggle.

A cop car siren can be heard in the distance. Savage gets up in a panic, running for his parked car. He turns around and shoots both men in the heads, before getting in his car. Future jumps to the front seat, as they speed away. 21 Savage and Future are now driving away recklessly, with a police car trailing behind them. Future panics, as 21 remains focused on the road ahead. He reaches his left arm out of the window and shoots at the cops, while Future does the same from his side of the window. “Lord forgive me, lord forgive me cause I’m sinnin,” he pleads as he continues to fire. The cop car flips over and they both laugh as they head back to their private location. They turn off the lights to lay low, and begin to discuss their next victims.

Future insists they need to visit Russell Wilson next, to Savage’s disapproval. He gets a text from a woman he’s been dying to entertain, which then prompts him to leave Future behind. He arrives outside of the woman’s house, and makes his way to her door. She comes to the door wearing a silk red robe, draped over her alluring figure. She smiles as she bites down on her lip. He kisses her as they make their way to the bedroom. She shoves him on the bed as cop car lights gleam through the curtains and bounce off of her now naked skin. “When I first met you, another n*gga had your heart,” he whispered to her as she smiled. “But I’ma player so you know a playa played his part.” The cops now surrounded the house, while Savage and the woman appear to be unfazed. They continued their love fest as the red and blue lights bounce off the walls. Police have made their way to the front door and bursted in. The woman stands at the door, somehow fully dressed, and looks at the cops, puzzled. Two policemen pin her down while the others begin to search the house. They burst through the bedroom, where the curtains blow back, exaggerating the vacancy of the room. 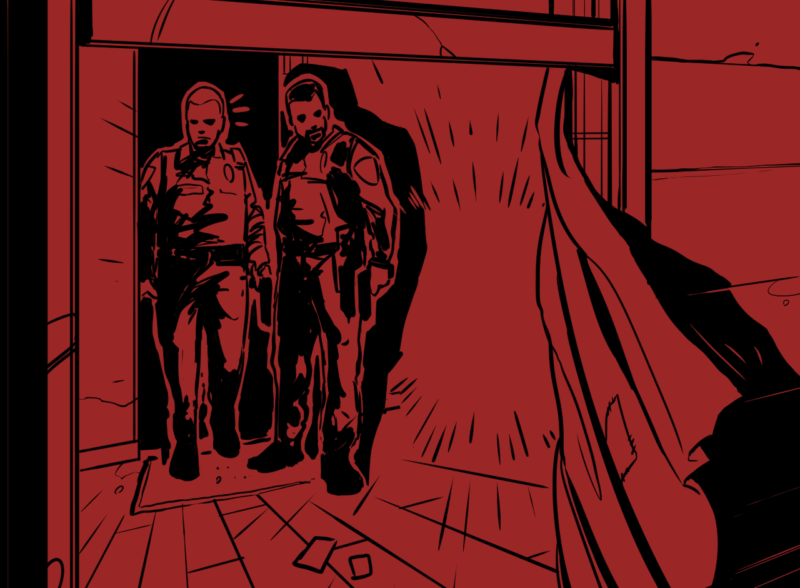 Current Time:  21 Savage’s dark red car cruises through the night, ending up on Ocean Drive with the police not far behind him.  He’s visibly unbothered by the night’s previous happenings. Whether or not he gets busted is none of his concern. Say his name on a song, and literal shots will be fired. That night he chose to prove himself.