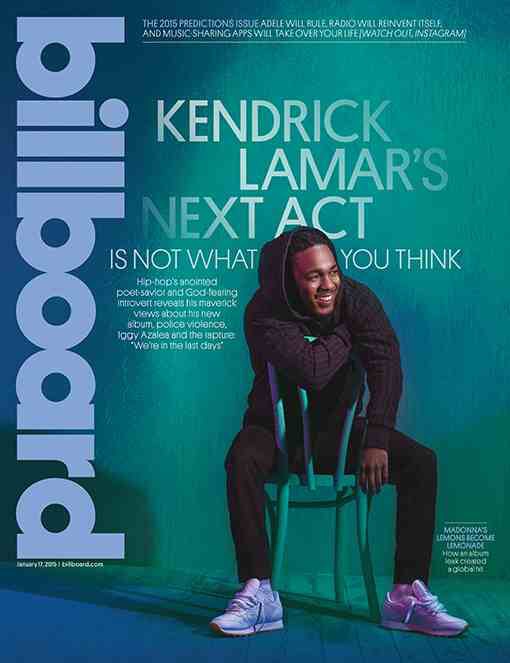 Kendrick Lamar is putting the finishing touches on maybe 2015’s most anticipated album. He recently sat to speak with the good people over at Billboard Mag to talk about the process and a few other subjects.
Read some of the excerpts below.

He has a title for his new album, which is nearly finished:

The first single off Lamar’s new album — which he says he has already named, although he won’t share the title…

Lamar says that “the end is in sight” with his unfinished album, which is bittersweet for him. “My enjoyment is creating the music,” he explains. “Once it gets pressed up, with bar codes on it, then it’s not really fun anymore.”

He believes Iggy Azalea has a place in hip-hop:

“She’s doing her thing,” he says. “Let her. People have to go through trials and tribulations to get where they at. Do your thing, continue to rock it, because obviously God wants you here.”

He’s been discriminated against by police and believes change “starts from within”:

He also has been treated unfairly by the cops — “plenty of times. All the time.” Asked about the high-profile killings of African-Americans by police in 2014, from Ferguson, Mo., to Staten Island, he says, “I wish somebody would look in our neighborhood knowing that it’s already a situation, mentally, where it’s f—ked up. What happened to [Michael Brown] should’ve never happened. Never. But when we don’t have respect for ourselves, how do we expect them to respect us? It starts from within. Don’t start with just a rally, don’t start from looting — it starts from within.”

Awards and accolades are cool, but they aren’t the be-all and end-all:

“That’s not my overall goal,” says Lamar of winning awards. “I appreciate them recognizing me. It’s best to just go and enjoy the festivities.”