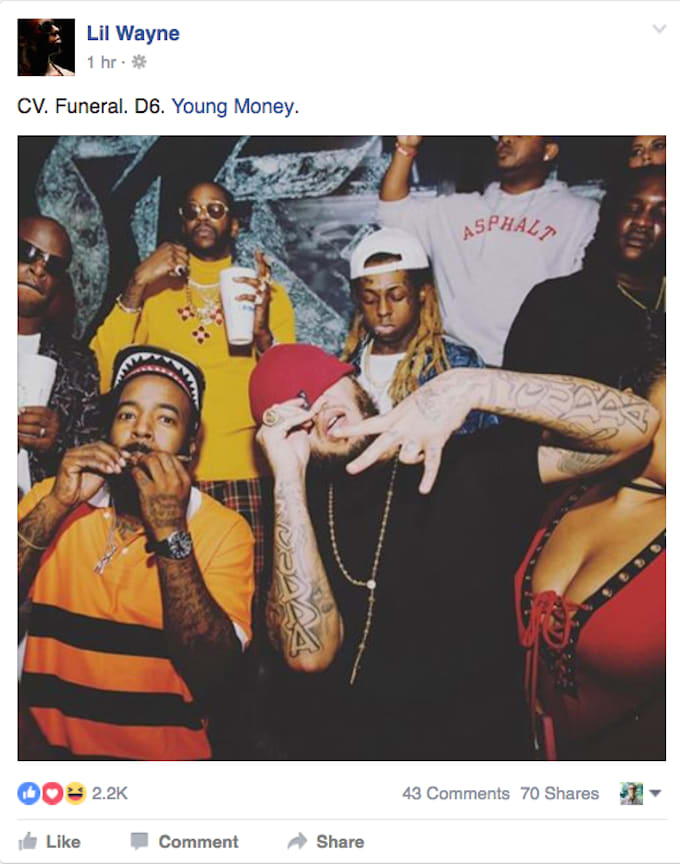 Late Wednesday night on Lil Wayne’s Facebook, he posted a photo with a message that seemed to imply that his long-awaited Tha Carter V album was on the way, along with a two other new projects.

The post, which you can see above, shows Wayne surrounded by his his entourage including his good friend 2 Chainz and reads, “CV. Funeral. D6. Young Money.”

We have been waiting for Tha Carter V since 2012, and with all the legal troubles he’s been having with Cash Money of course many of us, doubt that album will see the light of day. But maybe he knows something we don’t and he definitely has a lot of completed songs in the stash. It’s been revealed recently that pharma-bro Martin Shkreli has made the claim to have purchased two full CDs worth of material from Carter V sessions, so the release of another Dedication mixtape and the Funeral project Weezy teased several months ago doesn’t seem unreasonable.

As of right now, it looks looks like his recent court battle with Cash Money records for $51 Million is still a long way from being resolved. But lets hope we get a new project from Weezy sometime soon. Stay tuned for more updates on Wayne’s projects for 2017.