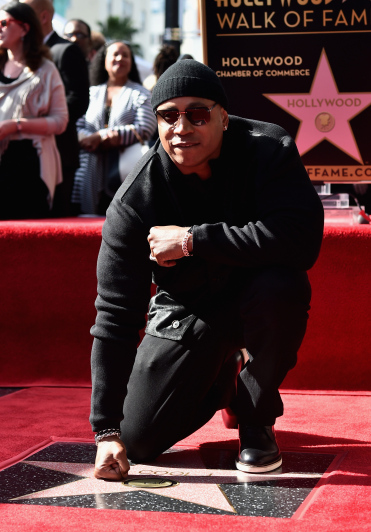 HOLLYWOOD, CA - JANUARY 21: Rapper/actor LL Coo J attends a ceremony honoring him with the 2,571st Star on The Hollywood Walk of Fame on January 21, 2016 in Hollywood, California. (Photo by Alberto E. Rodriguez/Getty Images)

The G.O.A.T. LL Cool J received one of the highest honors a entertainer can recieve, he was given a star on the Hollywood Walk of Fame.

LL has been in the spotlight for over 30 years now, he is one of hip hops most influential artist and also a bonafide tv/movie star. Uncle L was celebrated with a special ceremony on Thursday afternoon where the star was unveiled. His superstar friends Diddy, Queen Latifah, Russell Simmons, Magic Johnson, co-star Chris O’onnell, along with his wife Simone Smith and mother Ondrea Smith.

“Just know that I really, truly and deeply from the bottom of my soul appreciate this award,” said LL. “And I want to say one last thing, and that is: ‘If a task is once begun, never leave it ’til it’s done; be thy labor great or small, do it well or not at all…Thank you grandma.”

The rap icon is getting set to host the 58th annual GRAMMY Awards, on Feb. 15 live on CBS.