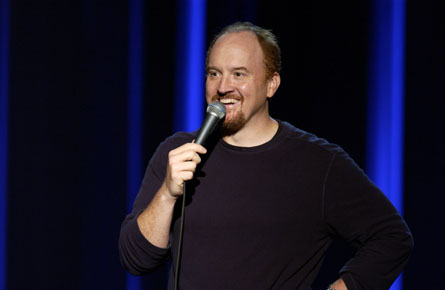 Louis C.K. is one of stand-up comedy biggest draws and in 2011 he changed the game by releasing Live at the Beacon Theater independently on his own site for just $5. Today he treated his loyal fans again, after canceling his Madison Square garden show due to the bad weather reports, releasing Live At The Comedy Store right here. Watch the preview below.

C.K. sent out a heartfelt thank you letter to his fans via his website. In the letter he talks about “Comedy Store,” and reveals why he chose to film at the iconic Los Angeles venue. If you missed out on the lengthy email you can read it in its entirety below:

Nightclubs, comedy clubs, is where comedy is born and where comedy, standup comedy, truly lives. Going back to Abraham Lincoln, who was probably America’s first comedian, Americans have enjoyed gathering at night in small packed (and once smokey) rooms, drinking themselves a bit numb and listening to each other say wicked, crazy, silly, wrongful, delightful, upside-down, careless, offensive, disgusting, whimsical things. Sometimes in long-winded, red faced hyperbole, sometimes in carefully crafted circular, intentionally false and misleading argument. Sometimes in well-chiseled perfectly timed trickery of verbiage. Pun-poetry. One line, one off, half thoughts. Half truths. Non-truths. Broad and hilariously wrongful generalizations, exaggerated prejudices and criticism of nothing and everything while a couple over here shares a pitcher of sangria, this table of guys order round after round of beers. These women over here are having vodka and cranberry. This guy drinks club soda and sits alone. He actually came for the comedy. It’s a club. It’s a bar. It’s late at night. No one here is being responsible. These are the things we do when we are DONE working and being citizens. We go to a comedy club and pay a bit of money to laugh harder than we ever do anywhere else.

That is the standup comedy that I’ve been doing for almost thirty years. I have been working theater (and now arena) stages for the last nine of those thirty years but the amount of hours I’ve spent on a club stage outnumber the theater stage hours by more than I can figure.

I’ve been on comedy club stages probably more than I’ve stood on any other kind of spot in my entire life. I started in the Boston comedy scene, on ground that had been laid by great comedians like Steve Sweeney, Steven Wright, Barry Crimmins, Ron Lynch, Kevin Meany, Don Gavin, back in 1985 when I was 18 years old. I skipped college (still regret it), worked shitty jobs (will never regret that) and spent every single night at any comedy club in Boston I could finagle my way into. I would watch every single comedian and I would BEG to get on stage.

In 1989 I moved to New York. I discovered a bursting comedy club scene, where you could literally do 8 shows on a saturday night. (I remember Ray Romano held the record at 9 shows).

All working out every night in clubs all over the city. There was the Improv on 44th street. On 1st Avenue, Catch a Rising Star and around the corner on 2nd ave, the Comic Strip (still there). Carolines was on the Seaport then. And in the Village we had the Comedy Cellar (still there), the Boston Comedy Club and the Village Gate.

I spent my early twenties bouncing from one stage to the other, from 8pm till about 4am, when Dave Attell, Kevin Brennan, Nick DiPaolo and I would head to a diner and eat breakfast.

The money was terrible. About ten dollars per show on the weeknights, fifty a show on the weekends. So every other week you had to leave town and work in another city. You’d go live in Atlanta, Columbus, Phoenix, Tampa, for a week. Most clubs would put you up in a condo behind the club and you’d work the whole week. Tuesday thru Sunday, two shows Friday, three shows Saturday. You could make about 700 a week as an opening act. A good headliner might make 2500 or 3,000 but that was rare. I worked in comedy clubs all over the country and I think I actually remember every single club. My favorite clubs were the smelly little beer soaked places with dim lighting and low ceilings. Go Bananas in Cincinnati. The Brokerage in Long Island (still there) Penguins in Cedar Rapids. The Comedy Underground in Seattle.

Then there were chain comedy clubs that were always too antiseptic and suburban. Some of them were literally inside of a mall next to a sunglass hut. The Improvs, the Funny Bones.

There were some comedy clubs around the country that were legendary. That lasted out the death of comedy in the 90s. The independent and truly great rooms where you can still smell the cigarette smoke exhaled by Bill Hicks. The Acme in Minneapolis. The Punchline in Atlanta. The Punchline (not related) in San Francisco. Cobbs in San Fran. The Laff Stop in Houston. Zanies in Chicago. Charlie Goodnights in Raleigh. The Comedy Works in Denver. These were the Meccas. When you could get a week at Acme, you know you could continue having the will to do this shit for another few months. A week at the Punchline in San Fran could get you through the next week at Harvey’s in Portland.
There were club owners that were part of Comedy History. Who knew how to shape comedy. Mark Babbit, Lewis Lee, Manny Dworman, Lucien Hold, Silver Friedman, Bud Friedman, Ron Osborne, others.

I spent all of my mid to late 20s and thirties working out in places like these.

Later when I moved to Los Angeles, I discovered a scene out there that was creative and fun and also steeped in show business history. You could see Norm Macdonald. Charles Fleicher. Robert Schimmel.

In LA they have coffee houses and very cool rooms like Largo, where you can bring your notebook on stage and try just about anything.

I would sometimes go on stage at places like Mbar or Largo and come out with twenty minutes of new material, cheered on by the young, open and adaptive crowds of the “alternative” scene. But I never believed those jokes until I took them to the Improv, where the more average and basic character of the audience would cut the new material down to about three jokes.

And then there was the Comedy Store. I would take the last three remaining jokes to the store on Sunset. Maybe ONE of those would get a chuckle. And that joke, I knew, was the true treasure of the night.

I have always found the Comedy Store to be the most intimidating club of my life. It is what I thought comedy clubs to be when I listened to Lenny Bruce records as a kid. The black vinyl couches and chairs, the red formica stage. Andrew Dice Clay on stage playing to fifteen people in open defiance of their hatred and funny as hell. The Comedy Store is really show biz. As in Milton Berle with his bow tie undone around his neck show business. Mop your brow and say “tough crowd” show business. A guy being beaten up in the parking lot show business. The Comedy Store is where Pryor cut his teeth. Letterman fought to get spots there. George Carlin. Eddie Murphy. Marc Maron told me stories about living in the apartment behind the Store and how Sam Kinison pissed on his bed one night. This is the Comedy Store. The wonderful dark side of comedy.

The Comedy Store is the only club in the country that NEVER passed me when I auditioned. I auditioned at many clubs where I didn’t pass but I always went back and finally did pass. The Comedy Store NEVER passed me. I just wasn’t right for them. I didn’t start working there until I became well known enough to circumvent the audition process. Until I became one of those guys who can just walk into a nightclub and go on stage.

So why did I shoot my new special in this place? I don’t know. Maybe because, after thirty years of doing comedy, the most exciting feeling for me is going on stage, not entirely sure it’s going to go well. To this day, when I work at the Store, I feel there’s a one in three chance I might bomb. Like bomb hard. To a guy my age who has been doing it this long, that is exciting. So over the last tour I did this year, I started doing shows at the Comedy Store “Main room” to feel it out. The staff of the club is excellent and they really know how to run a traditional room. I loved working with them. Pauly Shore and his family were very gracious when we approached them about shooting my special there.

I really feel truly privileged to have shot this special on that stage.

Okay I didn’t mean to write such a long thing about comedy clubs. The point is I prepared the material for this special on club stages. I went to the Cellar here in New York, and their new club, The Village Underground, about ten times a week with the occasional trip uptown to Gotham Comedy Club and “The Stand” on third avenue. I went out to LA to put that spin on it, working Largo, the Improv and finally the Comedy Store, hammering this stuff together in front of late night comedy club audiences. So it only seemed right to shoot it that way.