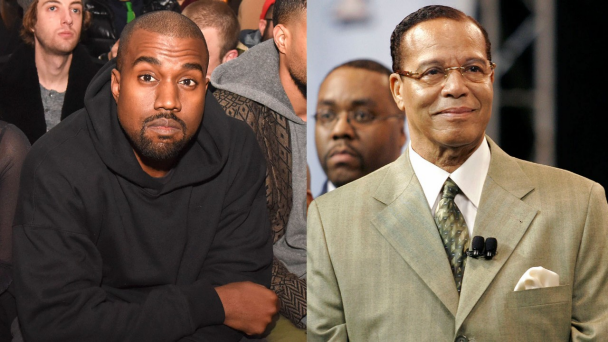 “Your children are not like you, parents,” Farrakhan says in his speech. “The rappers, oh man, they rapped on the condition of the hood, but they are all becoming conscious now and white folks are upset.”

He gave this speech at Christ Universal Temple in Chicago, Kanye West’s hometown.

“I had a talk with Kanye West,” Farrakhan says. “He visited me at our farm, just he, but we had a good talk. I know that there’s a better world coming. I know that there’s a world coming, that the color of your skin, as Doctor King said, is not going to be the ticket. It’s your desire to do righteousness. Brother Kanye came to visit me and he brought his wife and his little daughter and it was a beautiful meeting. A lot of my people, you really are very sick. You judge me with the stupidity of your sick minds. I’m just going to tell you a few things because you are not going to get away with mistreating me. I love you and I never sent nobody to harm. Anyone who has a problem with me or these brothers and sisters, they would kill concrete if I directed them that way.”

Farrakhan, the leader of the Nation of Islam, is reportedly working with Kanye West on a documentary on the minister’s life.

“Minister Louis Farrakhan is one of the most controversial figures of any religious organization,” HipHopDX wrote in a Kanye West editorial. “Makes sense as to why one of music’s most polarizing figures would want to create a documentary on the outspoken leader of the Nation of Islam. Kanye told The Breakfast Club the feature film will center around Farrakhan’s life as a classically trained violinist before being introduced to Elijah Muhammad. Knowing Yeezus’ eye for visual design and team at Donda could potentially deliver something pretty fascinating.”

During the Breakfast Club interview with Kanye West from February 20, the artist compares Kim Kardashian with Minister Farrakhan.

“In the same way my wife got stamped with a sex tape, the Minister was stamped with [bigotry] and it’s important that while he’s still alive he sees the people appreciate his message,” Kanye says. “If you ever hear him talk, it’s about humanity. It’s about one race.”