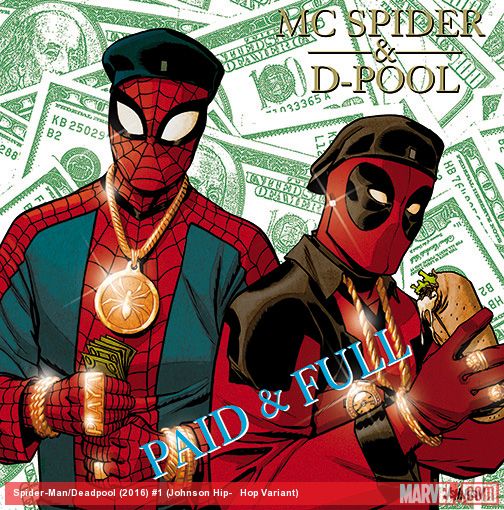 Marvel comics has paying homage to iconic hip-hop covers since this summer and now in January you’ll be able to own 14 of them for free. They’ve paid homage to the likes of Eric B. & Rakim, Jay Z, Wu-Tang Clan, Slick Rick, A Tribe Called Quest, 2Pac, Biggie Smalls and many more. Be on the look out for the 32-page comic this new year.

“The hip-hop variants were a really special initiative that caught fire in the outside world. We thought this was a great opportunity to highlight that and make it available to fans for free.”
Alonso explained the rationale behind selecting albums to pay tribute to (and picking appropriate characters) in an interview with Uproxx earlier this year.

“At the very beginning of the process, we roped in a few artists we knew were hip-hop heads — Sanford, Damion Scott, Juan Doe, Mike Del Mundo, Mahmud Asrar, etc. — and did a lot of brainstorming about what iconic covers HAD to be included, which characters would work best for them, and that’s when we nailed down homages to some of the most iconic covers: Sanford’s 3 Feet High & Rising, Damion’s Aquemini, Juan Doe’s The Chronic, Mahmud’s Long.Live.A$AP. That’s also when we came up with the self-imposed rules, was that any recording artist that got a cover got just one cover, so we could pay homage to as many rappers — and styles — as possible. We could’ve done an homage to every single A Tribe Called Quest album, you know what I’m saying?”

The free comic will be available on January 6 at participating stores.