This past week things have been a little confusing in the world of Lil Uzi. 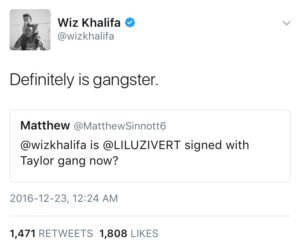 Due to any confusion or contrary belief, Lil Uzi Vert is only "Signed" to Generation Now, LLC !

Respectfully, we have alotta of love for Taylor Gang and Wiz, but Lil Uzi Vert is signed to Generation Now. Here is your answer.

Now that we cleared that up, the Philly rapper caps off his huge 2016 by releasing a video for the Lil Uzi Vert Vs. The World standout “Ps & Qs.” Watch the 4 minute video directed by Yashxana above.