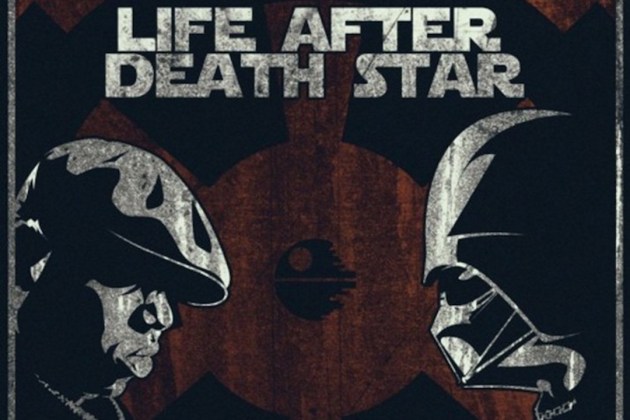 Hip-hop heads and nerds can join forces in their fandom as two creative geniuses decided to pair Notorious B.I.G.‘s Life After Death with the thematic music from Star Wars for the mixtape, Life After Death Star.
With only a few weeks until the next installment of the sci-fi series, Star Wars: The Force Awakens, hits theaters on Dec. 18., Richie Branson and Solar Slim (aka Otaku Gang) released the mash-up tape on Monday (Nov. 30).
The collection starts off with the Star Wars‘ theme paired with an old Biggie interview. You know you’re in for a fun ride as Biggie’s speech on hustling and stupid rappers is heard over the inspirational song.
On the 16-song tape, the production duo use various tracks from Biggie, including “Ten Crack Commandments,” “Victory,” “Party and Bulls—,” “Suicidal Thoughts” and “Big Poppa,” which are all chopped and screwed to fit the strings and horns from Star Wars‘ music.
But while the mixing is impressive, the duo made sure to pay respect to the original creators. “Special thanks to Christopher ‘Notorious B.I.G.’ Wallace and his family for blessing the world with his talent,” read their website. “Without his lyricism and the awesome Star Wars musical source material provided by John Williams and Mark Griskey, this tribute would not have been possible.”
As the intersectionality of the hip-hop and nerdom continue, this latest tape is definitely a force to be reckoned with. And the cover art featuring Biggie paired off with Darth Vader crafted by Bowe Bonney, makes it even better.
Now we just need a collaboration between Yoda and Tupac. But in the meantime, check out the tape below or download it for free at lifeafterdeathstar.net.