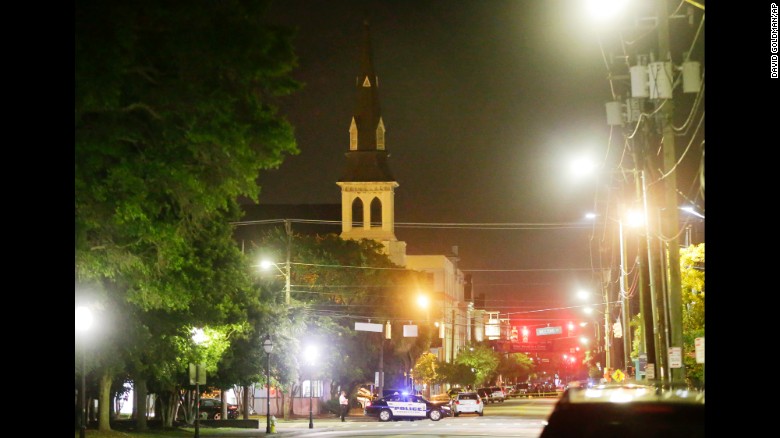 Last night (June 17) a white gunman (Who is still at large) entered the historic Emanuel African Methodist Episcopal Church and killed nine innocent people, reportedly three men and six women. Unfortunately eight died at the scene and one died later at the hospital. There are three survivors, with two in the hospital, according to ABC, who also reported that one 5-year-old survived by playing dead. The condition of the hospitalized victims is not known at this time. Charleston police have released surveillance photos of A 20 something year old Dylan Storm Roof, the suspect who they believe is the white male who opened fire in a historic Black church last night.

According to Raw Story, the terrorist’s motive was racist, and he targeted the Pastor at a Bible study.

A survivor says a man who killed three men and six women at a historic South Carolina black church reloaded five times during the massacre and offered a chilling statement of his motives.
The white man in his early 20s opened fire on a prayer service Wednesday night inside Emanuel African Methodist Episcopal Church in Charleston, killing Pastor Rev. Clementa Pinckney – who is also a state senator – and eight other congregants.
The lawmaker’s cousin said the shooter came into the church and sat next to Pinckney through the service and started shooting when it concluded.
A survivor told reporters that the gunman reloaded five times during the massacre and ignored the pleas of one man to reconsider killing the worshipers.
“You rape our women and you’re taking over our country — and you have to go,” the terrorist said, according to a survivor.
Investigators released surveillance camera images of the gunman, who is described as 5 feet 9 inches tall, with light brown hair in a bowl cut. 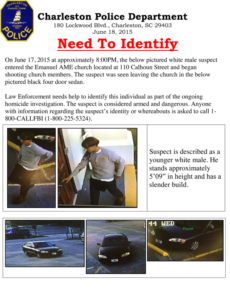 • A woman who survived the shooting says the gunman said he was letting her live so that she could tell people what happened, Charleston NAACP President Dot Scott told CNN.

• The person who shot and killed nine people at Charleston’s Emanuel African Methodist Episcopal Church was there for about an hour, attending a meeting with the eventual victims, before he began shooting, Charleston police Chief Greg Mullen said Thursday morning.

(Via CNN and ABC)

All of our prayers go out to the victims and their families down in Charleston, South Carolina.