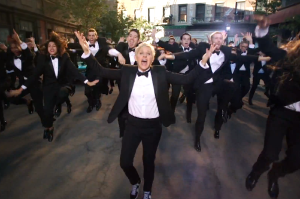 The 2014 Oscars started off a little slower than I expected. Not the usual big flashy dance numbers one would expect, especially since the host this year was Miss Happy Feet herself, Ellen Degeneres. Nonetheless, it was a pretty good night for Hollywood. As expected Ellen kept the crowd lively and even bought pizzas for the audience who had to sit through the 4hr ceremony. Pharrell put on one hell of a ‘Happy’ performance, and was even joined by Lupita Nyong’o, Meryl Streep, and Amy Adams dancing along to his platinum single.

Gravity dominated the show taking home 7 awards, the gorgeous and talented newcomer Lupita Nyong’o took home best supporting actress, Jared Leto and Matthew McConaughey’s speech almost brought us to tears. Of course they saved the best for last, despite Gravity winning the most awards for the night, it was 12 Years A Slave that took home the nights most coveted award for Best Picture.

Most Retweeted Photo Ever!

Speaking of Oscars, Ellen DeGeneres’ unscripted star studded selfie smashed records. The selfie shows Hollywood stars including (from left) Jennifer Lawrence, Channing Tatum, Meryl Streep, Julia Roberts, DeGeneres, Kevin Spacey, Bradley Cooper, Brad Pitt, Lupita Nyong’o and her brother and Angelina Jolie. She posted the pic on her personal twitter account tweeting, “If only Bradley’s arm was longer. Best photo ever. #oscars”.” It reached 779,295 retweets in approximately half an hour, even causing twitter to crash because of all the traffic. By the end of the show the photo had been retweeted over 2 million times, beating President Barak Obama’s photo when he got re-elected.

He made the comments while speaking to President Obama senior advisor Valerie Jarrett on The O’Reilly Factor last week. President Barack Obama invited O’Reilly to the launch of his new initiative called “My Brother’s Keeper” earlier last Thursday. The main focus of the program is to create opportunities and improve conditions for young minority men. Oddly enough, O’Reilly said he doesn’t believe the White House sees the “urgency” of the situation in the streets. “You have to attack the fundamental disease if you want to cure it,” O’Reilly told Jarrett. “Now I submit to you that you’re gonna have to get people like Jay Z, Kanye West, all these gangsta rappers to knock it off.” “They idolize these guys with the hats on backwards, and the terrible rap lyrics and the drug and all of that.” He went on to explain how celebrities and high profilers need to push the message to the younger generation in an attempt to “reverse the peer pressure.”

Seems that Spike has no love for the hipsters and new kids on the block in Brooklyn. Last Tuesday during a 90 minute long Black History speech at Pratt Institute, he couldn’t help but take a moment to give his views on “the other side of gentrification.” Captured by New York Magazine “Here’s the thing: I grew up here in Fort Greene. I grew up here in New York. It’s changed. And why does it take an influx of white New Yorkers in the South Bronx, in Harlem, in Bed Stuy, in Crown Heights for the facilities to get better? The garbage wasn’t picked up every motherf*ckin’ day when I was living in 165 Washington Park. P.S. 20 was not good. P.S. 11. Rothschild 294. The police weren’t around. When you see white mothers pushing their babies in strollers, three o’clock in the morning on 125th Street, that must tell you something.” Long story short, Spike hates all the gentrification going on in his beloved Brooklyn, yet sits nice and cozy in his upper east side apartment in manhattan, a little hypocritical if you ask me.