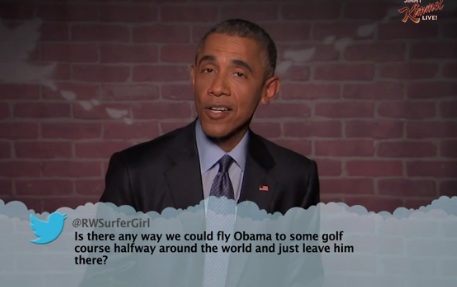 It’s not that hard to believe that the President gets his fair share of mean tweets too. Jimmy Kimmel often has celebs read negative tweets aimed their way, so last night he did the same for President Obama. The President also sat down for an interview in which he discusses student loan aid (can we just clear all debts please!?), social media, and much more. He also discusses Ferguson

“I think that what had been happening in Ferguson was oppressive and objectionable and was worthy of protest, but there was no excuse for criminal acts, and whoever fired those shots shouldn’t detract from the issue,” Obama said. “They’re criminals, they need to be arrested.”

Watch the interview segments below.