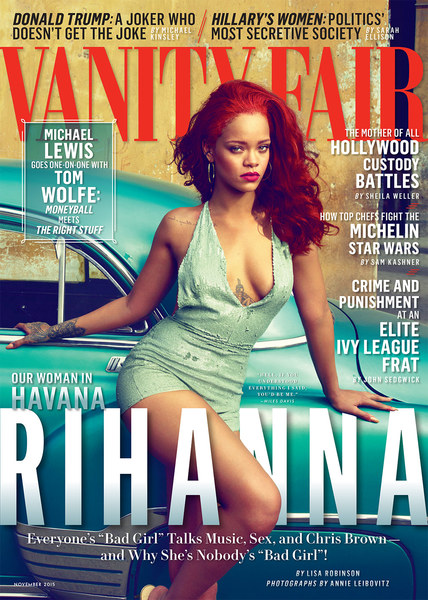 Bajan beauty Rihanna has been revealed as the star of Vanity Fair’s 2015 November issue, which features hot photos of her in Cuba shot by photographer Annie Leibovitz.

Ri Ri gets very personal in this interview discussing her past relationships with Chris Brown and MLB player Matt Kemp, gives her insights on the Rachel Dolezal NCAAP fallout. Also Giving some new details on her upcoming Kanye West produced album and her see-through CFDA dress that caught everyones eye.

“I think she was a bit of a hero, because she kind of flipped on society a little bit,” Rihanna told Robinson during one long-ranging, late-night conversation. “Is it such a horrible thing that she pretended to be black? Black is a great thing, and I think she legit changed people’s perspective a bit and woke people up.”

“We were still dating … we were just three months in and I liked his vibe, he was a good guy, and then paparazzi got us on vacation in Mexico. He handled it well; I didn’t. I got so uncomfortable because now what? He’s not even able to be seen with [another] girl, because I’m dragged back into headlines that say he’s cheating on me, and I don’t even [really] know this guy. Some guys … I don’t even have their number. You would not even believe it,” she says with a laugh. “I’m serious, hand to God.” Given that she’s supposed to be so freewheeling, can’t she just have sex for fun? “If I wanted to I would completely do that,” she said in the interview.

On her sex life now:

Coming to sex, Rihanna admitted that she is neither dating nor having sex. “That’s why I haven’t been having sex or even really seeing anybody because I don’t want to wake up the next day feeling guilty. I mean I get horny, I’m human, I’m a woman, I want to have sex. But what am I going to do-just find the first random cute dude that I think is going to be a great ride for the night and then tomorrow I wake up feeling empty and hollow? He has a great story and I’m like … what am I doing? I can’t do it to myself. I cannot. It has a little bit to do with fame and a lot to do with the woman that I am. And that saves me.”

On her CDFA Dress:

“I wanted to wear something that looked like it was floating on me,” she told Vanity Fair. “But after that, I thought, O.K., we can’t do this again for a while. No nipples, no sexy shit, or it’s going to be like a gimmick. That night [at the C.F.D.A. awards] was like a last hurrah; I decided to take a little break from that and wear clothes.”

You can read the full interview here