Deadpool racked up last year at the box office bringing home a whopping $760 million reportedly world wide. And of course if a films a block buster the studio is for sure to re-up for a sequel. A teaser for ‘Deadpool 2’ hit the internet late Friday afternoon, the clip can also be seen in various theaters across the world airing before fellow Fox powerhouse film ‘Logan.’

Anyone know the number to 911?

Ryan Reynolds reprises his role as the Merc with the Mouth, paying tribute to Superman but not saving the day as planned, displaying he isn’t your average super hero.

“I spent way too long in the phone booth,” Deadpool quips. “If I’m being honest with myself, I should’ve just called 9-1-1.”

Of course like in many of Marvel’s comic book adaptations, Stan Lee makes a cameo during Deadpool’s botched rescue attempt. And of course fan theories are already popping up about Easter eggs hidden in the teaser. 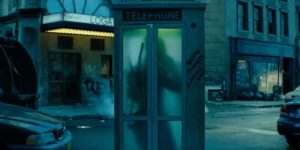 Also theres a huge fan pleaser with the second announcement written on the phone phone booth that “Nathan Summers is coming soon!” As many of you may or may not know Nathan Summers is Cable the son of Cyclops (Scott Summers) and Jean Grey, a time traveler from the future. Cable has been set to appear in Deadpool 2 ever since Wade Wilson announced it in the original film’s second post-credit scene.

“There’s been a lot of casting rumors for the character in the past few months, with Stephen Lang, Pierce Brosnan and Russell Crowe all the subject of fan speculation. Recently, it’s emerged that Michael Shannon was at one point in the running and Stranger Things’ David Harbor has screen tested. There’s been no word on whether Deadpool’s personal choice – Kiera Knightly – has been approached.”