In the film Back to The Future part II, Marty McFly (Michael J. Fox) took his Delorean time machine to the year 2015 where he donned the iconic Nike Air MAG power lace sneakers. Now with the year 2015 here fans are anxious to know if their dreams will come true and be able to buy the iconic shoes at retailers. In 2011 the shoe was released in partnership with Michael J. Fox via Ebay to help raise money for Parkinson’s disease, at the time, Michael J. Fox mentioned that “This project is exciting to me because it brings together three very passionate audiences: the Parkinson’s community, the sneaker heads, and ‘Back to the Future’ fans.” The major dissapointment about the exclusive release was that the power laces were missing, and Nike designer Hatfield stated we’d have to wait till 2015. 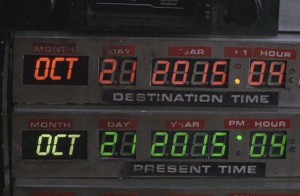 Now with confirmation of the release via #AgendaEmerge:

Without giving a release date, Tinker confirmed that his team is working as hard as possible to deliver the Nike MAG in 2015 with Power Laces, but also reminded us all that we still have “11 and two-thirds months left in 2015″. In other words – it is happening, but as to when, it is still unknown.

Another note as reported from the new released patient papers that have surfaced the shoe is called the Nike Mag not the Nike Air Mag because due to the power lacing system being deep in the midsole it doesn’t allow room for an air unit. Also there is a weight sensor in the shoe which might be for f\uture hoover board compatibility?