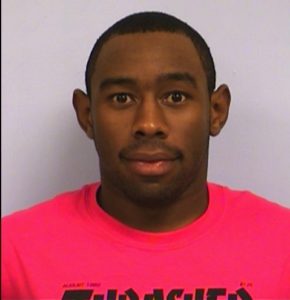 This past week hasn’t been pleasant for Tyler, The Creator he had to cancel a show on the early morning of March 14 after a drunk driver plowed into a group of people waiting to get in the venue, killing two and injuring 20. The Odd Future (OFWGKTA) leader was arrested at SXSW for allegedly starting a riot at his show at The Scoot Inn on March 13 during the SXSW music festival.

Travis County Sheriff’s spokesman Roger Wade said the Odd Future rapper, whose name is Tyler Gregory Okonma, was arrested at Austin-Bergstrom Airport and was likely to be arraigned later Saturday. If convicted of inciting a riot, which is a misdemeanor, he faces up to a year in jail and a $4,000 fine.

The rapper’s publicist declined to comment about the arrest.

Police say the 23-year-old Los Angeles resident incited a large crowd of fans at the annual music conference and festival to push their way past venue employees controlling access to a Thursday show that was already at full capacity.

Officers who were at the scene said in a warrant that Tyler yelled for fans to push their way inside twice, and that a bartender had to protect a woman from injury in the resulting push.

Tyler was released from jail on $25,000 bond and charged with a Class-A Misdemeanor. TMZ provides video below of the scene at Tyler’s show.