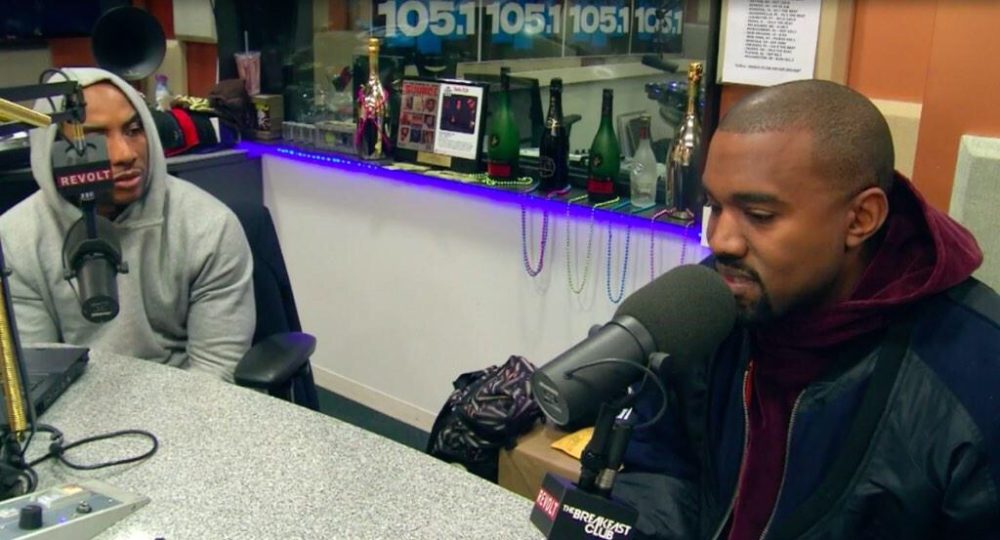 After his 2013 visit to the Breakfast Club we thought Kanye West would never go back, but as of late Ye has been in very good spirits and went to talk with DJ Envy, Angela Yee, and Charlamagne.

Of course there are plenty of things to talk about, with Yeezy’s name being in the news so much. From his new sneaker release, the infamous Beck stage rush, his new album, the Amber Rose drama, and possibly a new album with Drake.

Here are some quotes from the interview below…

On the limited release of the adidas Yeezy 750 Boost:

“See I didn’t want them to be limited actually, that’s something that the company did. I really want as many people to get them as possible. I don’t want to price to be $350. I don’t want to play like this sneaker culture game and all this so they be reselling this for high prices and stuff. I just want people have what I make. Like ain’t no limited release to College Dropout or limited release of Graduation.”

““The other day I went to dinner and sat down with Taylor Swift and ironically they were playing the Beck album, I was like man, this is kinda good I ain’t gonna lie [Laughs]. I hadn’t even heard it [before the rant]. I bet you the album is really good. I’m gonna listen to [it] and maybe it was potentially Album of the Year.”

On getting scolded for bringing North West to fashion shows:

“I mean, think about it, no one could tell me where to [bring] my child or not.”

“She could get naked if she wants to. It’s not illegal. And think about this, if Adam had never ate the apple we would all be naked.”

On reconnecting with Dame Dash and working on films:

“He presented me to the world, I wouldn’t have a record deal if it wasn’t for Dame Dash… “We creating something new now in the fashion world and in the film world.”

On Drake reinvigorating his focus:

“I went to this Drake concert in Germany, I flew to the concert to go see it, and he got this one line where he says something about people falling in love with famous girls and they don’t be working as much. So he rapped it, and he knew I was in the concert and he like looked down and stuff [Laughs] and he was right. I gotta get on my job. That’s why I got on trending of “Blessings” — Hello I’m back.”

On “Wolves” being originally the title to a planned collaborative album with Drake:

“I’m just going to go along and say because maybe this will promote it happening but the “Wolves” song came from a conversation that me and Drake had, where we were going to do an album together and the album is called Wolves.

Me and Jay started talking about Watch the Throne, then Drake went and did all the records with Lil Wayne and did the tour, so we never did it. But I just went out in the world, if y’all don’t like it y’all can send it right back [Laughs].

I asked him, we talked about it and he said yeah we was gonna do it. And actually he was sending beats back and forth and I got this one record with Young Thug that I’m gonna put on Rihanna’s album. I know I’m giving a lot of information.

Working on a documentary about Minister Louis Farrakhan:

“Right now I’m working on a documentary with [that is] about him, his music — he’s a classically trained violinist — and he’s also one of the most humane people. And now, the same way that my wife was stamped with the sex tape, the minister was stamped with [bigotry], and it’s important that while he’s still alive he has the see the people appreciate his message cause if you ever hear him talk, it’s about humanity. It’s about one race. Soon as you hear his name, people’s faces change. They have this perception. It’s a lot that I can learn from him.”

On keeping mum on the issues in Ferguson and police brutality:

“Yeah, my dad e-mailed me and said stay out of it. Now, my dad is like a thousand percent smarter than me and a thousand times more social than me. He like literally lived at a homeless shelter and he emailed me and told me to stay out of it—that’s my only parent so I have to listen to him sometimes.

On addresses the issues on upcoming album:

You know I’m always going to talk about what’s going on like Marvin Gaye said. It’s definitely going to be in there.

On the sound and status of the seventh studio album:

“Bars, cookout music that just feels like— my last album was a protest to music… this album is just embracing the music, embracing joy, and being of service to the people. I just hope that people like it and enjoy it.”

“I think 80%. I’m trying to get it finished, and get it to the people as soon as possible.”

On whether or not he’s plotting on a surprise release:

Album Review: Drake “If You’re Reading This It’s Too Late”