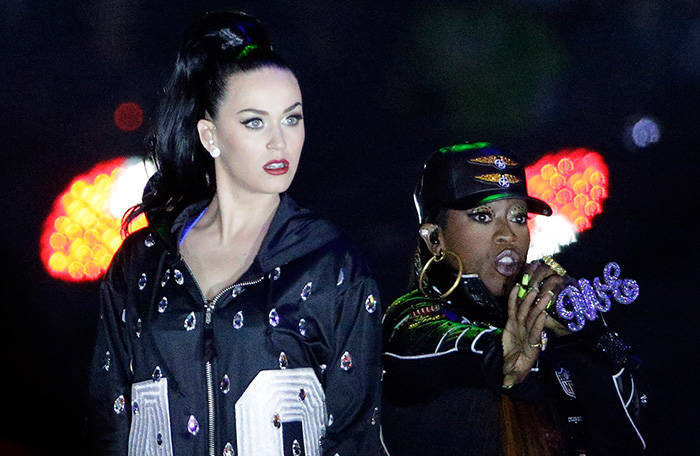 Following past performers Bruno Mars, Beyoncé, and Madonna, Katy Perry headlined the Super Bowl XLIX halftime show at University of Phoenix Stadium in Glendale, Ariz. Katy literally turned the show into a circus with, sharks, and fireworks everywhere. The ‘Fireworks’ singer entered the stadium on a giant mechanical lion to “Roar” wearing a Flame themed outfit that twitter had a field day with, before performing “Dark Horse” on a chess board. The legend Lenny Kravitz played guitar with her during “I Kissed a Girl,” and she transformed the field into a beach for “Teenage Dream” and “California Girls,” accompanied by sharks, beach balls, and palm trees. Once Missy Elliot came onto the stage, she took over the show, having twitter and all social media buzzing about her medley of her classics including “Get Ur Freak On,” “Work It,” and “Lose Control.” To close things out Katy departed from the stadium on a star, Katy returned to close out the show with her smash “Firework” as fireworks lit up the sky.

Watch the full 12-minute spectacular below.