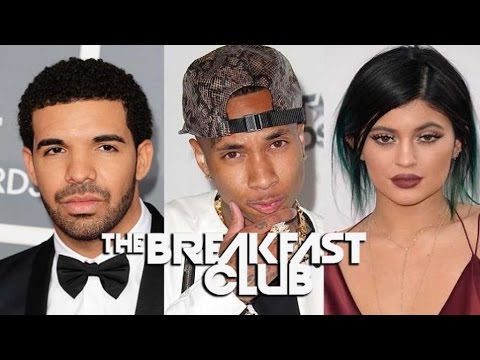 Since airing out his former label mates Nicki Minaj and Drake in his Vibe magazine interview last year, Tyga went on the Breakfast Club to address several burning questions, concerning all the drama, and headlines.

He addresses the Drake beef, the speculation surrounding him and 17 year old Kylie Jenner, and much more. Amber Rose aired out Tyga recently, saying: “[Tyga] should be ashamed of himself. He has a beautiful woman and a baby, and left that for a 16-year-old that just turned 17.” With all this mess happening Tyga contacted the Breakfast Club to finally give his side of the story.

On rumors of dating Kylie Jenner

After several reports (and photos) indicated a possible relationship between the rapper and the youngest Kardashian sibling, Tyga denies the speculation. “I’m not dating Kylie, I just want to get that out the way.”

“I want to be clear to everybody that I didn’t leave my family to be with Kylie. That’s ridiculous. Me and [Blac] Chyna, we broke up close to a year now and because of the decision we made, and things in our relationship that wasn’t going right, so we decided to split to raise an emotionally stable kid. That’s what we did and now we have a great relationship.”

On the growing speculation surrounding his relationship:

“It’s because what people make it seem and TMZ, you gotta think, TMZ didn’t really care about me until they figured out that I live next door to Kim [Kardashian] and Kanye [West] and all that stuff. But I been friends with them before I even met [Blac] Chyna. I was friends with Scott [Disick] her family for years, so me hanging out with them was nothing new. People just want to make a story out of it.”

“It’s crazy, the s*** that they make up is the craziest things I ever heard of.”

On fallout with Cash Money Records:

“I just kept it real [in the Vibe interview]. It came to a point where I was like, Man I’ma be turning 25 soon and I got a kid now, I can’t be sitting here waiting on the next man. But [Lil] Wayne gave me that opportunity… I would never say anything bad about Wayne.”

“The business just wasn’t right. It wasn’t Wayne’s fault. You see the situation that’s happening right now… if everything’s good and everybody got millions and 100s of millions of dollars, I need to make sure why mine is not right, you know what I’m saying?”

“Sometimes you have a light-skinned moment [Laughs]. First of all, we live in the same [neighborhood]. He knows exactly where my house is, I know exactly where his house is. We live next to each other. My thing is, if it’s real it’s real. If it’s not, it’s not. I just don’t f*** with him as a person because of the experiences that I’ve had with him personally. I’m not going against who he is as a person in the public or his music or anything like that, like I said his music is great. It’s undeniable.

On his feud with Drake:

“It’s not really a beef it’s just experiences that I’ve had with him, phone calls and stuff like that. I feel like he’s a nice guy on the outside but, he’s not genuine. He plays people left and right. That’s just my opinion and I’m entitled to have my own opinion. At the end of the day, what I said in the interview was how I felt at that moment.”

On his thoughts about Nicki Minaj:

“When I did that interview, people were saying that I called Nicki fake and that wasn’t the case. I just said, me and her just didn’t get along at that moment. Me and Nicki [Minaj] had got into it about something stupid, it was over a song, but that’s what brothers and sisters do. So, I don’t have anything against Nicki. I f*** with her 100%.

On being removed from Nicki’s “Truffle Butter” single:

Nah it was just a song that Drake was on, it was actually “Truffle Butter.” I was on the record. It just got weird.