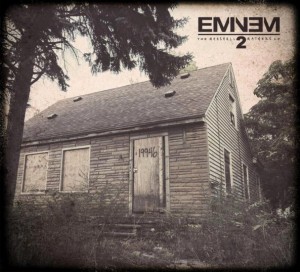 13 years ago, Eminem shook up the world and ruffled more than a few feathers along the way with the release of The Marshall Mathers LP; A dark autobiographical take of his personal life, mixed with homophobic slurs, and pocked fun at touchy subjects all while making fun of squeaky clean pop stars to no end. Now in an era where we have shock value moments happening everyday, how can Marshall shake things up in 2013? Luckily, The Marshall Mathers LP 2 isn’t hell bent on doing so. Instead, he’d much rather remind you of his lyrical superiority.

Em wanted to make it clear early on that MMLP2 shouldn’t be viewed as a sequel to it’s predecessor, but as a revisitation; a vibe and nostalgia equivalent to the first. But you’ll notice he reneges on that statement for the album’s opener “Bad Guy;” a story that cleverly picks up where “Stan” left off from part one. This time, Matthew Mitchell is avenging the death of his brother Stan 13 years later, by kidnapping and killing Eminem. “It’s just me, you and the music now, Slim I hope you hear it/we in the car right now wait..here comes my favorite lyric/I’m the bad guy that makes fun of people that die/and hey here’s a sequel to my Mathers LP just to get people to buy.” It’s the kind of song that’ll take a few listens to digest before appreciating how menacingly brilliant it is. “Rhyme or Reason” samples from The Zombies’ “Time of Season,” and Marshall even relies heavily on the hook to rip his father (no, not his mom this time) a new one. “So yeah, dad let’s walk/let’s have us a father and son talk/but I bet we wouldn’t probably get one block without me knocking your block off” he later spews. But things get to your classic Eminem offering on “So Much Better.” Never one to have luck with love, Em wishes his lady would drop dead after learning of her infidelities with Dre, Drake, and Lupe of all people.

With the pairing of him and Rick Rubin, it became clear that Em’s vision was to pay homage to old school hip hop in a unique way. We get a glimpse of this with “Berzerk,” which unfortunately is one of the weaker moments the album has to offer. “So Far..”samples Joe Walsh’s “Life’s Been Good,” and even flips the chorus for the return of a playful Shady. But the now older, Slim has some really dad-like lyrics here: “My apologies, no disrespect to technology But what the heck is all of these buttons?” he raps. He even expresses his frustration with getting a Kool-Aid stain out of his couch. Presumably put there by one of his daughters. Not all is dad-rap though, as “Rap God” proves that. The six-minute long lyrical onslaught runs laps around your favorite rapper with an unimaginable amount of flows, while elsewhere he pairs with Kendrick Lamar (the only rap feature on the album) for “Love Game.” Shady welcomes K Dot into his masterful forte of playful rhymes and Kendrick holds his own. Both comedically trade barbs over their unfortunate experiences with love and while entertaining, it’s definitely not what fans would’ve loved to hear from them.

Backing out of calling this one a true sequel was the right move. Not only is it not as groundbreaking as the first, but the production fails to captivate with the lyrics. Although Dr. Dre Executive Produced this effort, he didn’t fully handle any production here which is unfortunate. I hate to say it, but the pairing of Eminem and Rick Rubin just wasn’t my cup of tea. Both are brilliant..but separately. Em’s message here is crystal clear; “I’m 41 and I can STILL rap my ass off.” That could be the only reason for picking such a subpar beat (“Rap God”) and ripping it to shreds the way he did. Or picking the same subject from his first LP and making it interesting again (“Brainless”), or even pairing up with Rihanna for the underwhelming “The Monster” cause he knows his flow will draw you in. You should also take note that this is the most lyrically confident Marshall has ever been in his career.

Where in the past he name checked himself as last on his list of favorite rappers ( The Eminem Show‘s “Til I Collapse”), here on the closer “Evil Twin” he knocks more than a few names off the list. Fuck Top 5, bitch, I’m Top 4 and that includes Biggie and Pac, whore, and I got an Evil Twin So who do you think that’s third and that fourth spot’s for?  he confidently raps. The show stealer here would go to “Headlines” where he now recounts his troubled relationship with his mother and even apologizes for their past misunderstandings. Even with great moments sprinkled all over, MMLP2 fails to capitalize off of Em’s wit, but somehow manages to prove his God-like lyricism is unmatchable. Yes. In that arena, this ‘revisitation’ is a blockbuster hit.

Tyler, The Creator Stops by The Arsenio Show