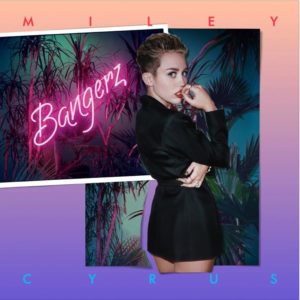 We all experience drastic changes throughout our lives. Remember when your mom looked at you one day and said “When did you start doing that?” or “When’d you get so tall?” Well it’s kind of like that for Miley Cyrus except..well she’s growing up in front of the World. The once Hannah Montana star isn’t so young anymore, and is making what may seem to be drastic efforts in letting you know so. Justin Bieber seems to be having the same problem getting his fans to transition with him, but on Bangerz, Miley is practically force-feeding us her introduction to adulthood.

Executive Produced by Mike Will Made it, who even handles a bulk of the production, there’s seems to be a bigger focus on the direction here, than you may initially think. The opener “Adore You” may take listeners by surprise, as it serves as a vulnerable ballad. Cyrus isn’t equipped with powerhouse vocals but going minimal sets the tone, while “SMS” completely unravels the innocence of it’s predecessor with edgier lyrics included. “I’m a female rebel, can’t you tell?” she later brags on the Nelly-assisted “4×4.” The production by Pharrell pays good homage to her country girl upbringing, with Nelly to help set the tone. Although she may appear to be a wreck in the making to the public, Cyrus displays she’s very much in control and shows eagerness to be taken seriously in her adult life. “Wrecking Ball” addresses heartbreak and the downward spiral of a love lost, but playing up the image she’s created for herself as of recent, the video had to keep us talking, and so it did.

Bangerz does an impressive job balancing both emotions of Cyrus. While she’ll appear to be at her most emotional on one song, the very next she’s in celebratory mode as if to melodically brush off the anger. On “Love Money Party” she brings Big Sean in on the fun, as she quickly downplays each of the three topics at hand. “Love ain’t nothing but love when you learn how to love, it ain’t nothing but love,” she sings emotionlessly. The real highlight here can be found in “Drive.” The Mike-Will production helps her soar to new heights as she recounts the heartache she endured with ex fiancé Liam Hemsworth, but she once again brushes off the pain and holds her middle fingers high on the self explanatory “FU.” “I got two letters for you, one of them’s F the other one’s U, cause what you gotta do is go get yourself a clue,” she angrily sings in a tone that would bring Adele to mind. French Montana shows up briefly, but does a good job at not spoiling the magic.

As Miley continues to grow as an artist, the shock value will be harder to reach because she seems to have it down pact at the moment. The VMA performance was only risqué so to speak, because she’s a 20 year old white girl with a seemingly squeaky clean past. Bangerz sets out to differentiate her as an artist from her recent headline-worthy behavior (think the MTV Video Music Awards, and her recent knack for twerking) and for the most part does an impressive job. Artists reinvent themselves all the time, and this is no different scenario. In fact if they built on it enough, Mike Will and Miley could easily have the chemistry to that of Justin Timberlake and Timbaland. She’ll eventually need to find a better balance of her emotions on record, but Bangerz has hitz.

The Return of the Thirst Trap Queen: Kim Kardashian is Back