The show is slated to feature numerous artists including the A$AP Mob and A$AP Rocky.

A$AP Yams is officially getting his own tribute show and it’s coming next month.

The show is slated to be at Terminal 5 in New York City and take place on January 18. More artists are soon to be named.

A$AP Yams passed away earlier this year at the age of 26. Since his death, numerous tributes have been done including A$AP Ferg’s recent exhibition at Art Basel. 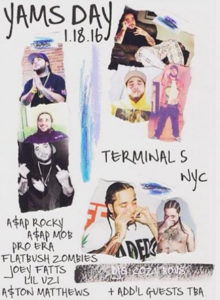