“The Avengers: Age of Ultron” cast hit Italy on Monday for a day of filming that included the two newest characters: Scarlet Witch and Quicksilver. The twins, played by Elizabeth Olsen and Aaron Taylor-Johnson, I’m interested to see this plot line because the X-Men movie has a Quick Silver in the film as well (He looks pretty lame by the way). The X-Men Franchise is owned by Fox and The Avengers is owned by Disney so the technically the two worlds don’t exist. I am also sure CGI will be added to Olsen and Taylor-Johnson’s characters for the film, the film is set for release on May 1,2015. Check out the photo’s below. 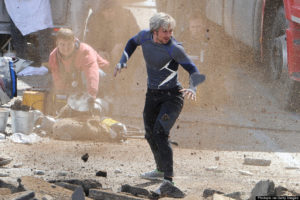