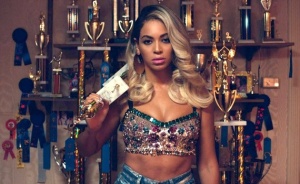 Jay Z said New Rules but DAMN !!!! No Promotion , no leaks , no lead radio singles. King Bey just dropped an early christmas present on us all and history was made . Mrs. Carter could be changing the music industry as we know it on this past Thursday at mid night Bey set the internet on fire by releasing her album exclusively through iTunes . Are her music peers taking notes ?

Apple® today announced that BEYONCÉ has become the fastest selling album ever on the iTunes Store® worldwide with an unprecedented 828,773 albums sold in just its first three days. BEYONCÉ also broke the US first week album sales record with 617,213 sold and proved to be a global success going to number one in 104 countries. The album represents Beyoncé’s biggest sales week ever.
via Apple