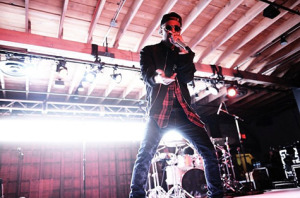 Last Night fans lined up for hours to wait for entry into the G.O.O.D. Music show case at Yahoo head quaters for SXSW festival. Upon entry fans were treated to open bar and DJ set’s from Been Trill. The show case was set off by Newcomers Hollywood Holt and Ryan McDermott followed by Harlem’s own Teyana Taylor, who pleasantly surprised us with her a cappella cover of Lauryn Hill’s “Killing Me Softly.”

Next up was ChiRaq’s (Chicago) own King Louie and his protege Katie Got Bandz, They performed the hit underground single “Pop Out”, the performance had the venue so ecstatic, fellow Chicago mc Chance The Rapper hit the stage to do his cooking dance along side Louie and Katie.

With his fiancée Naya Rivera looking on (who looks so fine it looks like she baths in gold by the way), headliner Big Sean graced the stage with “Sanctified” and “1st Quarter Freestyle” and all the rest of his hits in his growing catalog. He was joined by his G.O.O.D. Music label mate’s Pusha T for “Mercy” and Travi$ Scott for the remix to “10 2 10.” The Detroit Player definitley knows how to put on a show with all the energy he gives his fans.

Show case goers held out for an appearance from Yeezus following Sean’s set, but he did not show. The G.O.O.D. Music El Hefe was across town headlining his own concert with Jay Z for Samsung.

Below is video coverage from the Show Case shout out to Nigel D. at RealTalkNY: