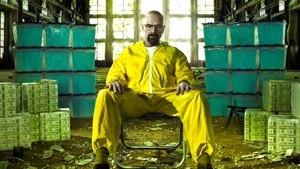 Up more than 300% over last year’s finale, the series concluded last night to much acclaim. AMC president Charlie Collier, said:

“Breaking Bad is simply unique. It all starts with Vince Gilligan who really only ever asked for one thing – the opportunity to end the show on his own terms. That is exactly what Vince did last night and, as always, brilliantly so. Congratulations to Vince and to every single person involved in this remarkable journey. We’re proud that AMC will forever be known as the birthplace and home of this iconic show and, at the same time, we tip our Heisenberg hat to the fans who made this a truly shared experience.”

Debuting in 2008, Breaking Bad tells the story of Walter White (Bryan Cranston), a struggling high school chemistry teacher who is diagnosed with inoperable lung cancer at the beginning of the series. He turns to a life of crime, producing and selling methamphetamine, in order to secure his family’s financial future before he dies.

Did you catch the series finale?