Chris Brown Just cant get it together these days, he’ll be spending a little more time in jail than expected. Also, if the assault trial he is facing in Washington, DC doesn’t go his way, he’s looking at up to a maximum of four years in prison. The “Loyal” singer was in court today (wearing on orange prison jumpsuit) and the judge, the same one from his Rihanna assault case, was clearly annoyed with the singer.

The judge said Chris had an “inability to stay out of trouble.” Hizzoner was especially concerned at a statement Chris made at the rehab joint, “I am good at using guns and knives.” So Chris will sit in jail until April 23. The judge wants Chris in the slammer until a D.C. jury decides if Chris committed criminal assault in an unrelated case. That trial is set for April 17 and should only last a few days. It’s unclear if the judge will let Chris back to attend the trial. The L.A. judge will hold a probation violation hearing on April 23, and if Chris is convicted in D.C. he’s in big trouble. Worst case scenario … he could be sentenced to 4 years in prison for violating probation in the Rihanna case. One of the conditions — obey all laws. Earlier today, it was reported that Brown was kicked out of rehab, and thus sent to jail, for violating rules like being too close to a woman and refusing a drug test.

Earlier today, it was reported that Breezy was kicked out of rehab, and afterwards sent to jail, for violating rules like being “too touchy feely” to a female in rehab and refusing a drug test. I really hope Chris gets his life in order because right now he is becoming this generation’s Bobby Brown and the butt of everyone’s jokes. He is WAY TOO TALENTED for this. 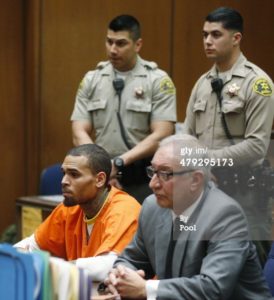