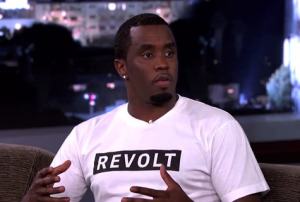 After launching Revolt TV, Diddy is looking to grow his clout in the music network market.
According to Mashable.com, Sean Combs has made a $200 million bid for Fuse TV. Reports suggest that he plans to merge Fuse with Revolt,which is brilliant and will enable Puffy to gain a significantly larger audience and higher carriage fees. Revolt’s viewership currently stands at approximately 22.8 million, which is small potatoes compared to Fuse boast around 74 million subscribers, through pay-TV systems like DirecTV (DTV), Dish Network Corp. (DISH) and Cablevision Systems Corp. (CVC).Diddy is just one of several bidders, this acquisition would be huge for Combs and definitely make him Mtv’s number one competitor.

President Obama On ‘Between The Ferns’ With Zack Galifianakis (Video)