After a stunning display of all the new Marvel trailers that were released at this past San Diego Comic-Con, geeks, nerds, fanboys and comic book fans rejoiced at all the new films and tv shows that will be coming in the next few months. The one that got great feedback and everyone was the trailer for the Netflix series Luke Cage which airs on September 30th.

The gritty trailer featured great action scenes and showed that Marvel is going to continue their streak of great shows on the streaming network. The Marvel Cinematic Universe expanding the way it is right now is great because character storylines are being brought to life for die hards who have been waiting for something live action from these characters and casual fans who are becoming new fans. Many Marvel fans are familiar with Luke Cage or Power Man “The Man With Un-Breakable Skin,” but not to the level of Spider-Man or The Hulk because his story isnt drilled into our heads over and over again like those popular characters. So what I wanted to do was give you guys a quick crash course in everything you need to know about Luke Cage. 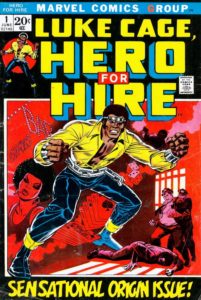 Luke Cage (Real name Carl Lucas) is from Harlem and made his first appearance in 1972 under the title Luke Cage, Hero for Hire. Marvel always made their storyline relevant to the times, so they created the story for an African American folk hero named Power Man. He is the first African-American Marvel character to star on his own cover, many of you may think The Black Panther was but Panther is a African citizen not a U.S. citizen. The cover of the comic book looks like a Blaxploitation movie poster similar to iconic movie posters like Blacula, Super Fly, Shaft and Foxy Brown. Cage appears on the cover in a badass outfit, in his best soul brother number 1 pose. Luke’s storyline is even embedded with Blaxploitation, he’s a ex con who speaks with hip street slang and has his famous catch phrase “Sweet Christmas.” 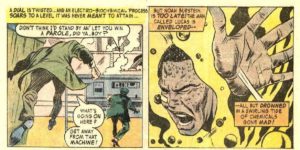 Cage was framed by his former best friend Willis Stryker, and placed in prison for drug possession. Obviously angry for being framed, Cage wasn’t a model prisoner and fought often and his battle skills caught the attention of a scientist named Dr. Noah Burstein. Burstein then recruits Cage to be apart of his experiment to try and recreate the super soldier serum that created Captain America. The experiment doesn’t go as planned. One of the prison guards tamper with the experiment and mistakenly gives him super human strength and unbreakable skin. After the incident he escapes from prison and returns home to Harlem where he officially changes his name from Carl lucas to Luke Cage. With his new super human strength he can lift up to 25 tons, is impervious to pain and is super durable. Having unbreakable skin has it’s pros and cons though. Because his skin is unbreakable if he suffers internal injuries, it is impossible for him to receive treatment and he has to rely  on his super healing factor.

Cage’s popularity dwindled as the 1970’s came to a close and the comic was in danger of cancellation. The Iron Fist comic was facing the same fate. Iron Fist is a martial arts expert with mystical powers who was inspired by kung fu flims. Although very different, they both had cult followings because they were based off cheesy movie genres from the 1970’s. So it became a no brainer to pair the two together and give them a Heroes For Hire series.

Iron Fist’s real name is Danny Rand, a character with a complete opposite background from Cage, Rand is the son of two wealthy parents who died when he was a child. The odd part is he was raised in a mystical city called K’un L’un, which is where he was taught martial arts and earned his powers. Cage and Iron Fist began as enemies but realized they were being pitted against each other. They resolve the issue and become friends that end up having the biggest bromance the Marvel universe has ever seen.

Maybe his friendship with Iron Fist is Marvel’s best bromance but his most important relationship is with Jessica Jones. The Jessica Jones series where he made his debut put that on full display how their attraction to one another is undeniable. In the comics, they first meet on the job. Cage is a hero for hire and Jones has retired from the superhero game and become a private eye. They begin a friendship, helping each other out with crime fighting and eventually become lovers. Their romance isn’t your typical fairy tale love story, it’s actually more relatable to the real world. They have casual relations, with on again off again dating until one drunken night Jessica gets pregnant by Luke and things get serious fast.

After the birth of their daughter, Luke and Jessica get married, and become one of the Marvel universes super families. It signified great growth and maturity for both characters, moving from being characters with sketchy pasts to being the modern family.

After Luke Cage gained his powers and returned to New York City, he started his hero for hire business in an abandoned theater in Times Square. He soon teamed up with Iron Fist, although reluctant to team up at first, Power Man and Iron Fist proved to be a formidable tandem. Soon after they joined forces with Dare Devil and Jessica jones to form the Defenders, which is being developed into a upcoming Netflix series as well. After that Cage has been part of several superhero teams including: the Secret Defenders, an expanded Hero for Hire team, Marvel Knights, the Thunderbolts and a bunch of different versions of the Avengers. He was even the leader of one of them.

The series is developed by former journalist Cheo Hodari Coker, and stars Mike Colter as Luke Cage. The show is based in Harlem and is said to be a gritty fugitive story. Coker described Luke Cage as “a powerful fusion of dark drama, hip-hop, and classic superhero action” while being “The Wire of Marvel television, because we really deal with a lot of different issues.” The show will be heavily influenced by hip hop. Each episode will be named after a Gang Starr song, Coker also proudly called Luke Cage the “Wu-Tang-ification” of the Marvel universe even using Ol’ Dirty Bastards “Shimmy Shimmy Ya” as the music for the trailer.