August 5th the Suicide Squad hits theaters, and casual fans and fans boys alike are ecstatic about the new film. The funny thing is outside of Harley Quinn many have no idea exactly who some of these characters are. DC is doing something very unique with this film, making the “bad guys” the focal point and not the super hero. Doing this is rather clever and groundbreaking of course, and making Will Smith one of the stars of the film definitely helped fans gain interest. I want to give you guys the back story on how the team was assembled and get you more familiar with each of the team’s characters.

The Suicide Squad was created by Robert Kanigher and Ross Andru and then reintroduced by John Ostrander in the 1980’s.

The team is the brain child of Amanda Waller head of A.R.G.U.S. (Advanced Research Group Uniting Super-Humans), after a disastrous mission in which good soldiers died in order to protect American interests. The Suicide Squad was created as a covert government-operated force consisting primarily of convicted criminals. Created for the government to carry out black ops missions while allowing the government the ability to deny any knowing of the team, as well a way of carrying out missions with expendable agents. Also known as Task Force X, the team will take high-risk missions from the government in exchange for amnesty. If they successfully complete their missions, they stay alive and get their sentences reduced. But if they fail, whelp like I said earlier they’re expendable, so they risk the chance of dying. Hence the nickname, “Suicide Squad.” The team members also have micro bombs implanted inside them, which can be detonated if they try to escape or cause trouble during the mission. Amanda Waller or “The Wall” as many call her, is a no nonsense hard ass and has no problem pushing the button on any of them.

The Suicide Squad has been around for a while and has had a revolving door of villains on the team. Naming every single villain that has been apart of the team would be a bit lengthy so i’ll just give details on the roster that will be featured in the movie. The roster consists of Deadshot, Harley Quinn, Rick Flagg, Captain Boomerang, El Diablo, Katana, Killer Croc, and Slipknot.

Rick Flag (Joel Kinnaman) is the team’s leader/baby sitter, he is the only member that isn’t a criminal. He’s a soldier in charge of field operations. He also despises all of them but he tolerates them because he’s a “good soldier” that follows orders. He is a former Special Forces operative with a strategic mind. Flag has appeared in shows like Justice League Unlimited and Smallville, as well as the animated movie Justice League: The New Frontier. Originally Tom Hardy was supposed to play Flag, but he was forced to drop out due to scheduling conflicts.

Deadshot (Will Smith) Real name Floyd Lawton is one of the most notorious assassins in the DC Universe. The confident marksman brags he never misses his target. He has a cybernetic eye-piece, which makes his accuracy damn near perfect and it also displays information for him. He’s a mercenary, once he is paid he will go at any and all lengths to carry out his mission. He also has a death wish, he won’t out right kill himself but he puts himself in really dangerous situations. In his own words he wants to go out in “spectacular fashion.”

Harley Quinn (Margot Robbie) The most recognizable and popular character of this film, Quinn was created specifically for Batman: The Animated Series in 1992. Originally a psychiatrist at Arkham Asylum, Dr. Harleen Quinzel was corrupted by The Joker and became his assistant/girlfriend. She was primarily just a Batman character, but over the years she has appeared in many parts of the DC universe. It was during the New 52 re-launch of DC Comics that she was added onto the Suicide Squad, and she’s been one of its primary members ever since. From the trailers it looks like Robbie will do the character justice. Her voice and mannerisms are on point but my only beef is her costume. I was hoping it would be more similar to the tv series and the comics. Also the fact that we will get to see Quinn’s origin story is pretty exciting too.

Katana (Karen Fukuhara) Born Tatsu Yamashiro, who is traditionally a hero in comics hails from Japan and is skilled in hand to hand combat and as her name implies a deadly swordsmen or swordswoman. It will be interesting to see how the film explains how she joins the Suicide Squad.

Captain Boomerang (Jai Courtney) George “Digger” Harkness is a skillful boomerang from Australia. He is a frequent villain in  The Flash comics, and is also well-known for being a regular member of the Suicide Squad. He typically sits back and watches things go to shit in the field while his teammates fight for their lives,he honestly just enjoys the mayhem. From the trailers we can tell his character will stay true to that. His most recent live action portrayal was in season 3 of Arrow.

El Diablo (Jay Hernandez) Real name Chato Santana, his entire face is covered by a skull tattoo and he likes to set shit on fire. His character in comics has been reintroduced many times, this version is the The New 52 version.

Killer Croc (Adewale Akinnuoye-Agbaje) Born Waylon Jones has a medical condition that gives him super strength but leaves him looking like a crocodile, which makes him very hard on the eyes. And oh yeah he eats people too. Croc’s claim to fame is as a Batman villain. 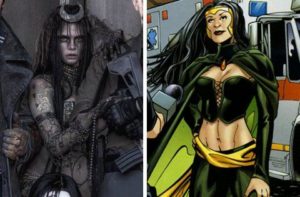 Enchantress (Cara Delevingne) Real name June Moore, Enchantress is a teenager who gained her powers from a demon and becomes a mystical hero turned criminal. She joins the Suicide Squad, as she believed they would be able to help her keep the villainous side in check. 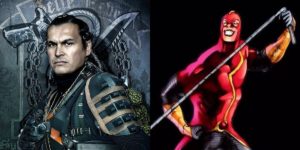 Slipknot (Adam Beach) Maybe the most boring member of the Squad has a talent for making really good knots, hence his name. He landed on Amanda Waller’s radar because of his talent for making great knots, and was convinced to be a part of the Suicide Squad.

Academy award winner Jared Leto will be following in the footsteps of Caesar Romero, Jack Nicholson and Heath Ledger in the role of iconic character The Joker. No one knows exactly what is The Joker’s role in the film yet, but we can all agree he definitely isn’t apart of the team. Although he has a lot of FaceTime in the trailers, I don’t think his role will be as big in the film as we are being led to believe. Most likely being used as bait to give the film more interest.

Have you seen the cartoon movie Batman:Assault On Arkham? 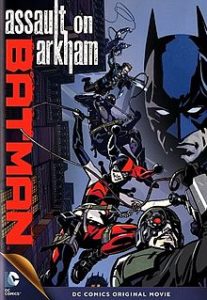 The digital film was released in 2014, and the story focuses primarily on the Suicide Squad, lead by Harley Quinn and Deadshot with Batman in a supporting role. Although the cartoon movie’s plot is very different from what the film’s plot will be, watching it will give you an idea of what you can expect in the film.

Make sure you check out Suicide Squad!