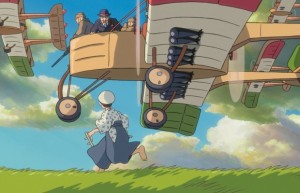 This is a weekend of big-name directors. Too bad two of them are pretty much talentless and unoriginal. The third director is the exact opposite, and for that reason only, it’s a good weekend to be a movie-goer!

We’ll start with the good. The very good.

HOW FUCKING DELIGHTFUL IS THAT TRAILER? Yeah, I know, really fucking delightful.

Hayao Miyazaki is one of the most deservedly celebrated animators in the history of cinema. His films instill wonder and inspire conversation, whether you like the anime style or not. He makes universal stories that are timeless, sad, joyful and beautiful. His past masterpieces include the Academy Award-winning Spirited Away (it also happens to be the highest grossing film in Japanese history), My Neighbor Totoro, and my personal favorite, the gorgeous Princess Mononoke.

The Wind Rises tells the fictionalized biography of Jiro Horikoshi, the man who designed the Mitsubishi A5M and A6M Zero aircraft used by Japan during World War II. I’m positive it’s about much more than just that. The Wind Rises is a bittersweet release, both thematically and personally for Miyazaki. He has announced his retirement, with the general assumption being that The Wind Rises is his last film. It’s the top-grossing 2013 film in Japan. Critics are raving about it, and I’m not surprised.

I can’t say enough great things about Miyazaki, my expectations are sky high. He is an artist in the truest sense of the word, and it’s always a pleasure to experience one of his films. I’m glad there’s at least one more for me to feast my eyes on.

I’m not going to waste any more time than I need to on this thing. To be fair, I think the idea of setting a film right during the eruption of Mount Vesuvius and subsequent destruction of Pompeii could be interesting, if in the right hands. But is it in the right hands? Hell no. Sony Pictures (BIG STUDIO!) and Paul W.S. Anderson (not to be confused with the brilliant Paul Thomas Anderson) are at the helm.

W.S. Anderson is a director-for-hire, attaching himself to any project that has ridiculous effects, wafer thin character development and a half-assed plot (the Resident Evil trilogy, the Death Race trilogy, DOA: Dead or Alive, you get the idea). I’d also like to point out renaming the film Vesuvius would have made it sound a lot more badass. Oh well, missed opportunity.

Oh, it’s a love story too? Fuck outta here, Anderson couldn’t direct real emotions if they shot him in the face with an emotional shotgun. AVOID.

Kevin Costner is dipping his toes into Liam Neeson’s money pool and trying his hand at the “tough and seasoned agent who has to complete one last mission to be free from his dangerous life” film. FUCK THIS. I’m fucking bored already.

McG (Charlie’s Angels, Charlie’s Angels: Full Throttle, Terminator Salvation, This Means War) isn’t exactly one to pin high hopes on, he’s one of those “more is less” type filmmakers. If you like a lot of mindless, unimaginative action and explosions and a minimal amount of everything else, then enjoy.

This has a lower score than Pompeii does on Rotten Tomatoes! Bad news.

Watch: Wayne Brady’s “Five Fingers of Death” Freestyle on Sway In The Morning