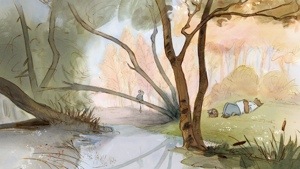 The big studio release this weekend is the Liam Neeson star vehicle Non-Stop, but you already know everything you need to know about that. Liam Neeson, action, ridiculous one-liners, etc. Maybe a couple hours of fun, but ultimately forgettable.

On the other hand, an Oscar nominee for Best Animated Film is being released in some capacity this weekend and you’d be much better off spending your money and time on that. It’s a dark horse to win the award, but it’s certainly deserving of your attention regardless.

Winner of the César Award (the French equivalent of the Oscars) for Best Animated Film and based on the classic Belgian book series by Gabrielle Vincent, Ernest and Celestine is at a solid (as solid as you can get, really) 100% “Fresh” rating on Rotten Tomatoes. With one look at the trailer, it’s easy to see why. It’s admittedly a rare occurrence for me to be delighted by a film, so when one does I know it’s a keeper. This is the perfect flick to bring children to that you can also enjoy.

The directing duo of Aubier and Patar have one film under their belt, the silly and absurdist animated feature Panique Au Village (A Town Called Panic). That’s a great start and a good sign for Ernest and Celestine. Set in a world where bear-fearing mice live underground and mice-eating bears live on the snow covered streets above, Celestine is a mouse who is an artist and dreamer. She’s different than the other mice. Ernest is a troubadour bear who happens upon Celestine in a trash can one day, and they form an unlikely friendship that becomes threatened by their respective species. It’s as simple as that and I can’t wait.

I can’t list a single reason not to go watch this. Animated in a gorgeous watercolor style that allows you to see the brushstrokes, combined with a charming story and characters, amounts to what is probably pretty close to a perfect animated film. If you get the chance, support great art and buy a ticket.

A fun little fact: Aubier played a journalist in the dark (SO. DARK.) comedy masterpiece Man Bites Dog. DON’T bring children to watch that one. You should check it out though, if you think you can stomach it.

Have a great weekend at the movies!