Kendrick Lamar’s powerful performance at this weekends BET awards was one of the show’s many highlights but our “friends” over at Fox news weren’t very entertained by the performance. K. Dot performed his new single “Alright” on top of a vandalized police car with a giant American flag waving in the background. While most of us at home and the many in attendance of the show audience applauded Mr. Lamar’s energy, the Fox News team didn’t like it one bit. The Compton rapper was accused of calling out of police brutality on the panel show The Five last night, as host Geraldo Rivera claimed: 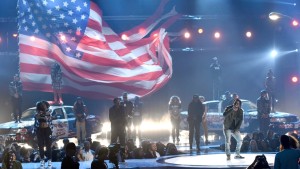 This is exactly the wrong message. And then to conflate what happened in the church in Charleston, South Carolina with these tragic incidents involving excessive use of force by cops is to equate that racist killer with these cops, it is so wrong, it is so counterproductive, it gives exactly the wrong the message.[…]
It doesn’t recognize that a city like Baltimore, where — remember Freddie Gray — they’ve had a homicide a day since Freddie Gray, no one’s protesting that. Baltimore, a tiny city, 7% the size of New York, has just as many murders as New York. You know, we’ve got to wake up at a certain point and understand what’s going on here.